The following was presented at the 2010 American Bee Research Conference in Orlando, FL.

3. Andinof, G.K. & G.J. Hunt – A NEW ASSAY TO MEASURE MITE GROOMING BEHAVIOR – Grooming behavior is one of the known mechanisms of defense for honey bees against parasitic mites. Varroa destructor is often considered the biggest beekeeping problem within the U.S. and around the world. Mite-grooming behavior has been described as the ability of the adult bees to remove Varroa mites during grooming and has been associated with mites that have been chewed by the bees’ mandibles, but the proportion of chewed mites is extremely tedious to measure. 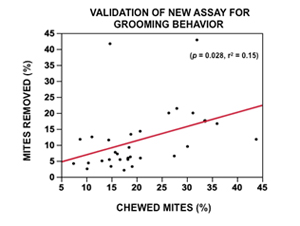 Figure. Relationship between the % of mites removed and the % chewed

We developed an easier assay to measure mite-grooming behavior that can be used for selection in breeding programs. Wood cages with screened tops and bottoms were used to hold a frame of bees collected from the brood nest. Bees were transferred to comb containing pollen and nectar but without brood. The mites removed during grooming were collected in sticky boards for three days at room temperature (22-25 °C) and then counted. The remaining mites on the adult bees were collected and counted using carbon dioxide (CO2) to anesthetize the bees and powdered sugar to remove the mites. The percentage of the mites removed was calculated.