Many animals live together as a group, but they are not necessarily social (e.g. a school of fish) because there is a very precise definition when it comes ot sociality. True sociality (eusociality) is defined by three features: 1). There is cooperative brood-care so it is not each one caring for their own offspring, 2). There is an overlapping of generations so that the group (the colony) will sustain for a while, allowing offspring assist parents during their life, and 3). That there is a reproductive division of labor, i.e. not every individual reproduces equally in the group, in most cases of insects, this means there is one or a few reproductive(s) (“queen”, or “king”), and workers are more or less sterile. 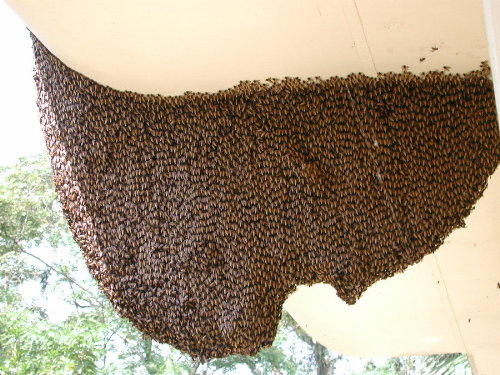 The giant honey bee (Apis dorsata) makes its nest on a single, free-hanging comb. This giant honey bee nest is on the eaves of a library (about 30 ft from ground). The nest is about 6 ft across. Someone has knocked a hole with a rock the day before, trying to steal some honey. Xishuangbanna, Yunnan, China. April 2002.

Obviously not all insects are eusocial. Michener (1969) provided some other classifications of various stages of social insects:

A survey of eusocial animals 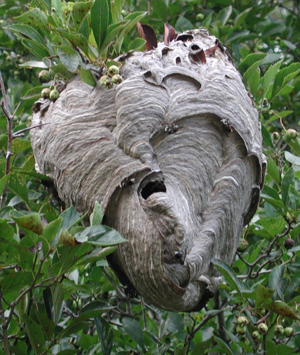 A nest of baldfaced hornets (Dolichovespula maculata, Vespidae), on a crabapple tree. The nest is about the size of a football, and about 8 ft high. Okemos, MI., August 11, 2003.

Eusociality was considered extremely rare in the whole animal kingdom, and even in insects it was only found in Hymenoptera (ants, bees, and wasps) and Isoptera (termites). However, recently this has expanded to a few more groups: in gall aphids (Homoptera) there are sterile soldiers who would sacrifice their lives to their clone sisters who can reproduce, so they are considered eusocial because these soldiers do not reproduce while others do. This is also the case for social thrips that are gall-forming (Thysanoptera). In 1992 a social weevil ( Austroplatypus incompertus, Curculionidae Coleoptera).was discovered. In non-insects, eusociality only appeared twice: in a mammal and a marine animal. Naked mole rats live in complex underground tunnel systems in Africa and animals in the same nest are closely related, only one female (the queen) reproduces, although workers, normally sterile, can ovulate when removed from the nest, presumably due a lack of inhibition from the queen. Snapping shrimp (Synalpheus regalis) lives inside sponges and each ‘colony’ has 200-300 individuals, but only one queen reproduces, again the caster is probably not fixed — the workers remain totipotent and can potentially become a queen when the queen shrimp is removed.

The table below summarizes the above information. Notice that “the number of times eosociality has evolved” does not mean the number of cases of eusociality (there would be tens of thousands if so, because there are about 9 thousand species, of ants alone). Instead it means how many times it has independently evolved (for example, there are 9 species of honey bees, if all of them shared a common eusocial ancestor, it would be considered to be evolved once here, actually you trace back to the lower branch of the taxonomic tree, and count only once at the lowest level). 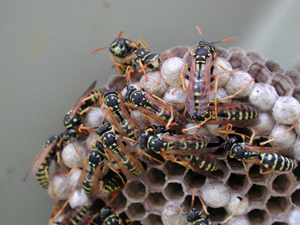 A nest of European paper wasps (Polistes dominulus). This is an invasive species in Michigan. It has become much more common than the grey paper wasp (P. fuscatus), which is not as aggressive. MSU apiary, USA. August 20, 2001.

How could eusociality evolve? Darwin, in his “Origin of Species” (1859) thought that sterile workers in a bee colony, being unable to transmit their genes, represent a special challenge to his theory of natural selection. This is because natural selection depends on the transmission of ‘traits’ that convey selective advantages to the individuals, and these traits have to be determined genetically (so they are heritable). If workers are sterile, how can they transmit the “helping traits” to the next generation?

This problem continued to trouble biologists until William Hamilton (1964) found an ingenious way to explain how a trait can be inherited without direct reproduction. Hamilton introduced a brave new concept, ‘inclusive fitness’, which basically says someone could still have a reproductive fitness, even if he/she has no direct offspring. This is while the ‘traditional fitness’ only count how many children one has, but inclusive fitness takes account of all others who share genes with the person (or animal). For example, I should share approximately 50% of gene with my full brother, therefore if I decide not to marry and have kids, but I help my brother to raise 4 children, it is equivalent to myself having two children. This inclusion of anyone elses’ fitness, who shares common genes by descent, factored by a coefficient of relatedness, is called inclusive fitness. Therefore although workers do not reproduce, if they share genes with their mother (the queen) to raise more sisters (future queens), their genes would be transmitted too, to the next generation. 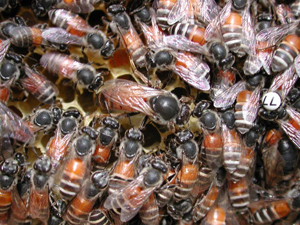 The queen and her retinue of a florea colony. Note the bee with ’77’ on her, which I tagged the night before. Because workers form a few layers of curtains, one has to comb through them to find the queen. This one took us about 20 min to find and I just got lucky to have this clear shot, because two seconds later she disappeared again. Both florea and dorsata queens can fly without any preparation. European and Asian honey bee queens would need to be starved for 2-3 days before they can fly because they are too fat when laying eggs.

In fact in honey bees and other hymenoptera, the relatedness among sisters are higher than among other animals. This is because of the haplo-diploidy sex determination: drone develop from unfertilized eggs and carry one copy of chromosomes (haploid) from their mother only (no father), while females are fertilized and carry two copies of chromosomes (diploid). Haploid drones do not have the complimentary copy of genes to do exchange (across the two copies of genes, alleles), so all the sperms produced by a single drone are identical (clones), if not considering newly produced mutations. Assume the queen is mated only to one drone (which is not true, we will come back to this point later), then all her daughters will share 50% genes from the father (since they are all the same), but 25% of their genes from the mother. The coefficient of relatedness among the offspring is therefore 0.75 (1×0.5 + 0.5*0.5). This is much higher than the 0.5 for sister-sister in a diploid organism (such as humans). The workers who share the same father and mother, are therefore also called ‘super-sisters’ because of this higher relatedness. This theory of one can pass genes through relatives and gain fitness is called ‘kin selection’.
Hamilton postulated that because supersisters share 75% of their genes, it is actually a better deal to be a worker, to whom, a new queen would have 75% of genes by common descent with her, whereas from the queen’s point of view, she only transmitted 50% of her genes to the new queen. In this sense, the inclusive fitness is actually higher for the sterile worker sisters, than for the fertile mother. Further, Hamilton argued that haplodiploidy must have played an important role in the evolution of sociality because it occurred 11 times in Hymenoptera, but much fewer times in other organisms combined. Note at that time the only other eusocial organisms are termites. Among the recently discovered social animals, thrips also have haplodiploidy as in hymenopteran insects.

One difficulty with the above argument is that the honey bee queen actually mates with more than one male (drone), in some cases as many as more than 30 drones, because half-sisters (workers who share the same mother, but fathered by different males) are only related to one another by 0.25 (0*0.5+0.5*0.5) the average relatedness among the workers in such a colony is close to the average between 0.75 and 0.25, which is 0.5, not different from other diploid organisms. Of course, one could argue that multiple mating is adaptive for other reasons, and arose AFTER sociality has been evolved. 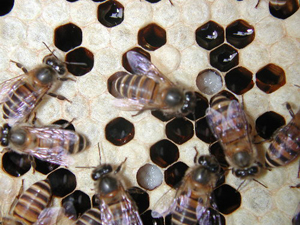 Apis cerana workers on capped brood. A. cerana probably never reuses old wax for brood capping (as the mellifera do), since the brood capping is almost as clean as the honey capping.

While the genetic system might predispose some organisms to have eusociality, it is easy to see that haplodiploidy is neither necessary (since there are other non-haplodiploid organisms being eusocial), nor sufficient (since not every species in Hymenopetera is eusocial). It is easy to see though, that eusociality can evolve easier in groups within which individuals are highly related, either due to haplodiploidy, or due to mating systems. In both termites and the naked mole rats, animals within a group are all highly related, perhaps due to inbreeding, although it is known in named mole rats, some males would migrate to other nests to accomplish periodic outcrossing, which might be necessary to reduce the cost of inbreeding. In aphids, all colony members are ‘clones’ because the mother can reproduce asexually (parthenogenesis). However, the marine shrimps do not show high degrees of inbreeding.

There appear to be common ecological features for other eusocial animals other than hymenoptera. For example, for newly discovered aphids, thrips, beetles and shrimps, they all have a commonly held, valuable resource (nest mounds, galls, or sponges). Queller and Strassmann (1998) distinguish these eusociality (fortress defenders) from the ‘life insurers”, in which cooperation creates benefits mainly through reducing the risk of reproductive failure (most Hymenoptera). Crespi (1994) argued that three conditions are sufficient to explain occurrences of eusociality for the fortress defenders. The first is the food and shelter are in enclosed habits, representing higly valuable and long lasting resources. Because of the high value of the resources, there should be strong competition for these resources. Lastly, because of the competition, selection should promote effective defense among the organisms. This has been shown to be true for aphids, thrips and shrimps. Interestingly, in shrimps the non-reproducing soldiers are mostly male, perhaps because they have larger claws and would better suit the job. Contrast this with males in Hymenoptera societies, their other name ‘drone’ suggest laziness and they do not perform work in the colony, perhaps because of their lack of weapon (no sting). 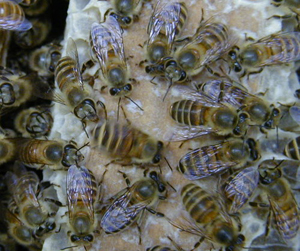 The worker in the center (blurred) is performing a ‘cleaning dance’ to elicit grooming behavior by other workers. Extensive grooming is considered one of the traits that cerana has to fight against varroa mites.

Because one criteria for eusociality is overlap in generations, parental care has been recognized as an important prerequisite for eusociality. Other traits, such as high adult mortality (e.g. foraging honey bees only survives 7-10 days), long periods of offspring dependence (21 days development for honey bee workers), and delayed age of reproduction, can favor the development of helpers. More recent studies in marine shrimps suggest that mutualistic interactions and restricted dispersal can also foster evolution of sociality.