The agenda of a honey bee colony is to reproduce and survive the next winter. This is essentially the same for a solitary insect, but in choosing a year-round colonial habit, honey bees are obligated to possess efficient behaviors in foraging, recruitment, food hoarding, and cold temperature survival. Moreover, the colony must reproduce as early as possible in the season to permit the new colony enough time to make a nest, forage, and store food for its winter needs. Some social species have solved the problem by rejecting colonial life over winter; in these species it is only the newly-mated queens that survive winter, entering a state of hibernation over the cold months and emerging the following spring to single-handedly forage and establish a new colony. Examples of these so-called annual colonies are found in the bumble bees and most social wasps.

With that background we can now examine the annual cycle of a colony of Apis mellifera, and I begin in the dead of winter. At this point, the bees are clustering in the center of their nest to conserve heat. Their precautions against winter chill actually began months or even years before when the colony chose its nest site. Cavities in old-growth trees, with high insulating properties, constitute the natural nest site for European Apis mellifera. Deep inside this nest, individual bees make the cluster contiguous in spite of the intervening combs by entering empty cells head-first; in this way the only distance separating bees is a thin comb mid-rib, not the entire comb. In the center of the cluster are the queen and a cadre of workers that are actively generating heat by consuming honey and shivering their thoracic flight muscles. The heat dissipates outward through the mantle bees who conserve the heat by clustering more or less tightly depending on ambient temperature. Over-heating is also a risk, and the mantle bees regulate this by opening channels through which cool air can flow into the cluster. Thus, winter temperature maintenance is a dynamic process of heat generation, conservation, and compensatory cooling. It is also energetically costly, requiring continuous withdrawals from limited food stores. For this reason, the cluster is never far away from stored food, and in a typical winter nest the clustering bees cover and occupy open cells while immediately above them is an arc of stored pollen and above that an arc of stored honey. The cluster is capable of moving slowly (usually up or laterally, rarely down) to access fresh food stores.

Spring and the reproductive cycle

There is no brood the first half of winter, which means the cluster can tolerate relatively wide temperature swings at its core. But once the winter solstice is passed, usually when temperatures are coldest, the colony now does the unthinkable – begins building up for its reproductive phase. In the center of the cluster the queen begins laying eggs and immatures begin developing. Temperature swings can be tolerated no longer and this signals an increase in the rate of food consumption and heat generation. It is no surprise that the greatest risk of colony starvation and freeze death happens in mid- to late-winter. Moreover, it is no surprise to learn that many colonies fail at this high-stakes gamble. In a study in New York state in the 1970s, only 25% of new colonies were still alive after their first twelve months. It is sad but true, winter starvation is the norm not the exception for Apis mellifera. 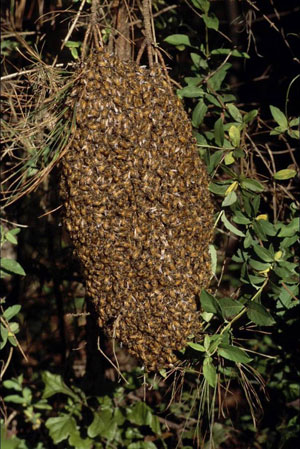 But under a happier scenario, the colony is able to accommodate its reproductive rate with its food stores. And once the earliest nectar sources become available the colony can supplement its precious stores with new provisions. At this point colony growth leaps forward rapidly: a growing number of newly-emerged workers are able to incubate an increasingly larger brood area.

This pattern of reckless growth continues for several weeks, limited only by the daily ebb and flow of food resources. It is aimed at one thing: colony-level reproduction which in honey bees happens by a process of colony fission, or splitting, called swarming. The process necessarily involves the production of queens, and a point is reached, usually around mid-spring, when the colony begins rearing queen cells. The process is fitful, and over the course of weeks a colony may tear down its swarm cells if foraging turns bad, only to start them again once fortunes improve. But if all goes well a day will come when the colony has several queen cells in various stages of construction, including some nearly ready to emerge. The actual event tarries until afternoon – nearly always a warm day with a good nectar flow in progress. Groups of workers begin a frenzied wave of running action around and around the interior of the nest. The old queen mother is bitten, jostled, and otherwise worried into a state of excitement. Then at once about half the colony’s population, along with the queen mother, takes wing and pours out of the colony’s entrance, forming a cloud of bees easily filling a space equal to a suburban back yard. The queen alights on some object, usually a tree branch, and her pheromones orient the cloud or swarm into an increasingly tighter radius as bees discover the queen and begin alighting on the branch around her. Before long a conspicuous ball of bees forms on the branch (Fig. 13). This is a temporary staging situation and lasts only a few hours. From the cluster, scout bees confirm the location of a nest cavity and before long the swarm takes wing again and enters its new home. There is evidence that the nest scouting process begins days in advance of the actual swarm, so that the function of scouts on the day of swarming is more accurately described as reorientation relative to the new position of the swarm. 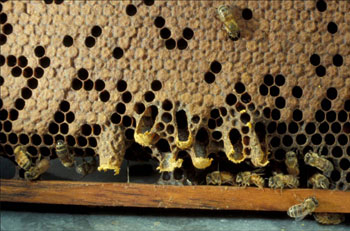 Fig. 14; It is easy to identify aborted queen cells because they are opened from the side. Cells opened at the tip indicate that a queen emerged from them normally.

Once established in the new cavity, there is one over-riding objective: survive the next winter. The bees, engorged with honey from the parent nest, immediately begin secreting wax scales and forming them into the combs necessary for brood production and food storage. Comb building must continue even after the initial honey supplies are consumed and since the stimulation of wax glands requires continuing supplies of nectar, colony growth can be stalled if floral resources temporarily dry up. The queen begins egg laying as soon as combs are built – within hours. In the remaining weeks of spring and summer, combs are built, brood reared, a forager force produced, and food gathered.

But turning our attention back to the day of swarming, there is another drama playing out back at the parent colony – queen succession, by no means a neat and tidy affair. In the simplest scenario, the first of the emerging daughter queens engages in a campaign of fratricide, personally killing each of her rival sisters in their cells. It is easy to identify aborted queen cells because they are opened from the side. Cells opened at the tip indicate that a queen emerged from them normally (Fig. 14). Once her rivals are eliminated the new queen takes her mating flights and begins laying eggs, and the parent colony settles down to rebuilding its foraging force and storing up a winter food supply. Frequently the scenario isn’t so simple. If a colony is especially populous it may swarm not once, but twice or even three times. Each swarm requires a queen, the old mother in the case of the first, and a daughter in the case of the later. The workers regulate this process by protecting, or not protecting, queen cells from rival sisters. But once the reproductive impulse is satisfied the workers cease protecting queen cells, the last surviving daughter assumes headship of the colony, and the colony spends the rest of the season preparing for winter. 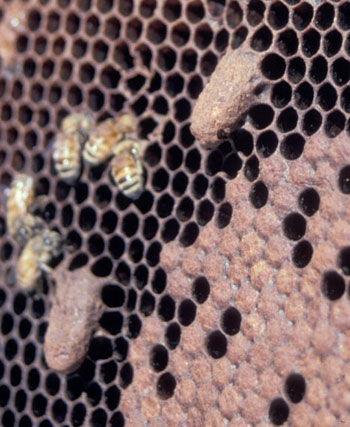 Fig15: Supersedure cells on the comb face, not along the comb edge.

It is important for a beekeeper to know the difference between queen cells made to replace a failing queen – called supersedure cells – and those made under the swarm impulse. Supersedure cells can occur any time in the active season when a queen is failing or is lost. Because they are made in response to a time-specific event – the loss of a queen – they tend to be uniform in age. They tend to occur on the comb face, not along the comb edge (Fig. 15). They also tend to result in comparatively poor queens because their construction is not necessarily associated with resource-rich times of year. Swarm cells, on the other hand, are more numerous, occur at various stages of maturity, and are associated with early spring nectar flows (Fig. 16).

Over the course of twelve months a honey bee colony ranges in population from about 10,000 to 60,000 insects. This translates to an average biomass of ten pounds, the size of a small dog. This dog-sized entity needs at least 100 pounds of accumulated honey and pollen to survive winter. So far so good. But what makes these numbers impressive is the fact that honey bees have so few weeks of a 52-week year in which to harvest that nutrient income. In most temperate regions the nectar season is brief, measured in weeks not months. Therefore, honey bees must be efficient foragers. Honey bees express this efficiency in at least two notable ways: foraging regulation and nestmate recruitment. 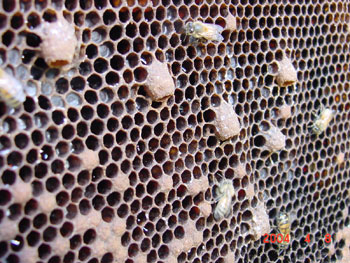 Fig16: Swarm cells are numerous, occur at various stages of maturity, and are associated with early spring nectar flows.

There is evidence that certain cohorts of bees in the nest are able to appraise the resource needs of the colony and communicate that need to foragers by way of a feedback loop. It works this way: If the colony’s greatest need is energy (carbohydrates) then the “appraisers” relieve foragers of their nectar loads rapidly and eagerly. This enthusiastic reception encourages foragers to continue foraging for the same resource. But if, on the other hand, the greatest need is for water, then foragers with nectar are not relieved as quickly as those carrying water. A lackluster reception at the nest encourages foragers to switch to a different resource.

Foraging efficiency is also displayed in one of the most celebrated attributes of honey bees – nestmate recruitment. Honey bee foragers, upon discovering a new resource, return to the nest and recruit nestmates by means of a dance language that communicates symbolically the distance of the resource from the nest and its location. Dancers communicate the relative richness of their resource by giving nectar taste samples to their sisters and varying the tempo of the dance: the faster the dance the richer, or nearer, the resource. Since any given colony has hundreds or even thousands of scouts and foragers dispatched at any time, there may be competing dances occurring on different parts of the comb. But foragers are able to assess the dances and concentrate on those communicating the richest resources. Because the network of recruiters is pervasive and responsive, spreading amoeba-like throughout the habitat, the colony is a model of rapid response. Once a rich resource is discovered a foraging force can be marshaled within minutes.

Source:
The above is from “First Lessons in Beekeeping” by Keith S. Delaplane, reproduced with permission by the publishers Dadant & Sons, Hamilton, Illinois, USA, Copyright, 2007. This book can be purchased in its entirety from Dadant & Sons