Those of you who have been keeping bees for over twenty years remember a time when bees pretty much took care of themselves and we expected at most ten percent winter-kill. But ever since mites were found in the US in the 1980s, we expect to lose 25% or more of our hives each winter and we need to think about controlling the mites. Recent surveys indicate that the biggest impact on colony losses can still be traced to the presence of Varroa mites and the diseases associated with them (Currie et al. 2010; Dahle 2010; Guzmán-Novoa et al. 2010; Peterson et al. 2010). In the winter of ’95-’96, we lost more than half of the colonies in Indiana, primarily because of Varroa (Hunt 1998). A recent study even suggested Varroa may have been a major factor in “colony collapse disorder” or CCD (vanEngelsdorp et al. 2009). A sustainable solution to this problem would be to breed for bees that can better tolerate Varroa and are resistant to diseases. Efforts for breeding for resistance are now getting a boost from the USDA-CAP honey bee health project. Here is an update on what we are doing.

Dysentery disease. A few years ago, researchers used DNA sequencing of bees with symptoms of CCD and made the unexpected discovery that Nosema ceranae was present in the US. This parasite is related to Nosema apis, which causes dysentery. We now know that N. ceranae has been here for more than a decade (Chen et al. 2008). It is not clear what the impact of this new Nosema has been but we do know that bees often have extremely high spore loads of N. ceranae in their guts, even in the summer time. My graduate student Gladys Andino has done some preliminary inoculations of bees in cages to look for variation in resistance to Nosema. These cage tests involved emerging bees in an incubator, marking them with paint so that we know what colony they come from, and feeding them spores in sugar syrup. Figure 1 shows that there was variability between colonies for the impact of Nosema on survival, suggesting it may be possible to breed for resistance. We are expanding the screening this year to see how repeatable these results are. 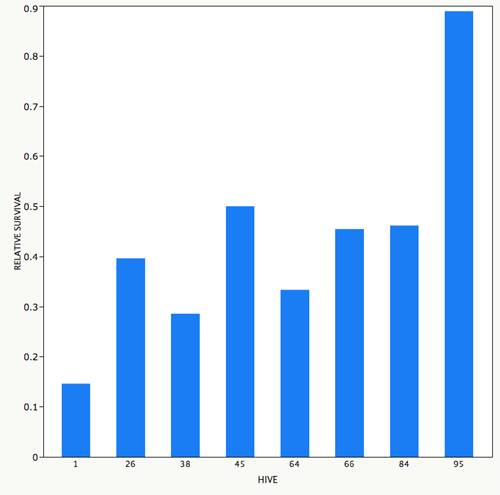 Viruses. There has been a lot of recent research on honey bee viruses, but since viral infections require expensive molecular techniques to analyze, it is difficult to know which viruses are causing the most widespread problems and viral infections usually go undetected. It is known that Varroa can transmit viruses and weaken the bee’s immune system. There is also evidence that some viruses can be transmitted to the egg from infected queens (Chen and Siede 2007; Aubert et al. 2007). Surveys have begun for viruses in the CAP stationary apiaries that were set up across the country. These surveys have shown that many bees have viruses but show no symptoms. Deformed Wing Virus (DWV) was the most prevalent in initial screens (see earlier article by Spivak). DWV is one of the viruses that are often associated with Varroa. We took a look at bees in the Purdue apiaries last year because mite populations were quite high and some colonies began to dwindle in the fall. We rarely treat our bees to control mites and there were no breaks in the brood cycle to reduce mite levels last year. A student in my lab, Alicia Kelley, looked at both dwindling and healthy-looking colonies and analyzed for Nosema ceranae and six viruses. She found that all of the 38 hives we sampled had deformed wing virus. Sick colonies were a little more likely to have Nosema. Acute Bee Paralysis Virus was strongly associated with both sick hives and colonies that died. Deformed Wing Virus levels were also higher in colonies that were co-infected with acute bee paralysis virus (Figure 2). There may be an opportunity to select for resistance to virus. It seems that the only studies that involved selecting bees for resistance to a virus come from Walter Rothenbuhler’s lab 35 years ago – the same guy who first bred bees for hygienic behavior! They found it was possible to select for increased survival of caged bees that were inoculated with the virus that causes hairless black syndrome (Kulincevic and Rothenbuhler 1975). It seems high time we started looking at resistance to viruses, so we plan to collaborate with Judy Chen, a virologist at the Beltsville USDA Bee Lab to try to screen for resistance to Acute Bee Paralysis Virus. 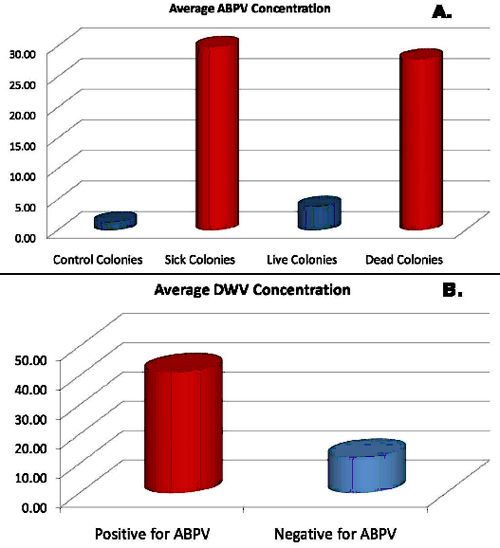 Figure 2. Relative concentration of Acute Bee Paralysis Virus and Deformed Wing Virus in bees. A. Colonies that appeared sick in the fall because the population dwindled and colonies that died during the winter had higher ABPV levels in the fall. B. Colonies that had more ABPV also had more DWV.

Mites. It seems that sufficient resistance to tracheal mites now exists in many bee populations, so let’s focus on Varroa mites. One method that beekeepers use to select for resistance to Varroa is just to let their hives go untreated and breed from survivors. This has shown some success but may not be the most efficient way. Another method is to import survivors like the Russian bees that the Baton Rouge USDA bee lab brought from far eastern Russia. A third way is to select for specific traits that have been found to confer some resistance towards Varroa. Several USDA and university breeding projects have taken this approach. The Minnesota hygienic lines were developed by Marla Spivak and colleagues, and were shown to have significantly lower mite populations in field studies. The two most important traits for mite resistance appear to be Varroa-sensitive hygiene (VSH) and grooming behavior. Bees with high VSH detect the mites in the cells and uncap those cells, which disrupts mite reproduction. Other bees have been shown to groom mites off of themselves and to bite the mites. At Purdue we have been selecting for bees that have lower mite population growth for years and in the past few years we have been focusing more on grooming behavior. Last year, we used CAP funding to develop a new method for assaying grooming behavior. The usual method involves taking mites that fell from colonies and mounting them upside down on microscope slides to see how many have been chewed by the bees. This method is enough to drive even the most patient grad student a little nuts! My student Gladys Andino now uses a method that involves collecting bees in frame cages and seeing what proportion of the mites the bees remove during a three-day period. She found that the proportion of mites removed correlated with the proportion of mites that were chewed in the colonies that the bees were taken from (Figure 3). This method was presented at the American Bee Research Conference, held in conjunction with the American Beekeeping Federation meeting in Orlando, FL, January 14-15 and a video of her talk will be posted on the honey bee health website www.extension.org/bee_health. 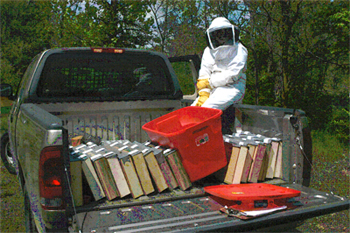 Figure 3A. Frame cages used for assaying grooming behavior. The tops and bottoms have screen. Mites fall out the bottom onto sticky sheets in the lab and are be counted. After 3 days, mites are also removed from adult bees with powdered sugar and counted. The proportion of mites that drop is calculated as a measure of grooming behavior.

The genetics of resistance. It is possible to make crosses between honey bees that represent high and low lines for a specific trait and to then use DNA markers to follow the inheritance of gene regions that influence the trait. In the honey bee, this technique was first used to map genes influencing behavioral traits like pollen foraging and stinging behaviors and eventually led to the identification of candidate genes (Hunt et al. 2007). This technique of “quantitative trait locus” or QTL mapping has also been used to map genes that influence general hygienic behavior (Oxley et al. 2010). The limitation of these methods is that there often are many candidate genes identified and we are still not sure which are the right genes. But if we can find the right genes, maybe we could use DNA markers in the genes or near the genes for marker-assisted selection. Then we could test to see if bees have the right versions of genes for resistance. Marker-assisted selection might speed up the process of breeding for resistance and allow us to incorporate several different resistance traits in the same breeding lines. 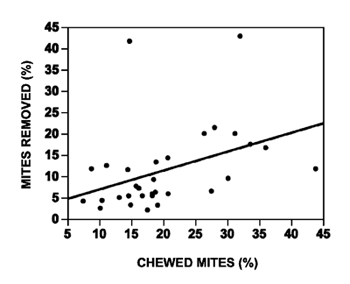 Figure 3B. The grooming assay works: The proportion of mites removed in cages correlated with the proportion of chewed mites on sticky boards taken from beneath the hives that we collected bees from.

Funding from the USDA-CAP and another USDA grant are being used to map genes that influence VSH and also genes that influence mite-grooming behavior. Jeff Harris of the USDA Baton Rouge Bee Lab has already done the single-drone crosses and analyses of VSH behavior needed for this gene mapping, and my colleague Miguel Arechavaleta-Velasco has done the same for grooming behavior. We will use Jeff’s data to compare bees that showed VSH behavior to their sisters that did not perform the behavior. For grooming, Miguel actually measured how long it took for a bee to react when he put a mite on its back. These analyses were done in a single family of worker bees that are daughters of a hybrid queen backcrossed to one of the two parents. In each bee, the DNA markers are inherited along with one of the two versions of each gene (high or low) from their mother. We plan to use a high-tech genotyping system for the mapping. The backcross workers will be analyzed for 1,500 single-nucleotide DNA differences (between the high and low parental lines) to determine whether a gene region came from the high or the low line. Then we will compare the presence of DNA markers from the high-VSH parent or high-grooming parent with the behavior of each individual bee to associate genes with the behavior. We think this mapping will be at much higher resolution than previous work done in bees. We would like to also extend the QTL technique to try to find genes for resistance to disease, but first we need to identify resistant and susceptible strains.

Selection for any trait is always a work in progress. Breeding is a slow, laborious process and once you stop selecting for a trait, you start losing it. Breeding programs do not provide a lot of publications for researchers, nor do they provide enough economic incentive for commercial queen breeders. Maybe this situation will change in the next few years as people become more aware of the value of helping bees to help themselves. Things that might accelerate breeding for resistance include good inoculation methods, better assays for the traits, understanding the important factors in disease progression, understanding the genetics, and methods for cryopreservation of honey bee semen or eggs. The recent funding from the government for bee research has put many of us researchers on a honey bee health kick, so more attention will be directed at these problems.

Acknowledgments. Funding for this work was provided by the USDA Managed Pollinator CAP, USDA CSREEES SARE, and USDA NRI. None of the work would have been possible without Krispn Given’s invaluable help with the bees.