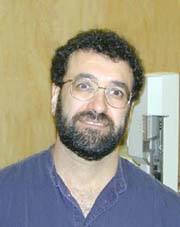 Dr. Eitzer received a B.S. with a double major in chemistry and environmental science in 1982 from the University of Wisconsin at Green Bay.  He went on to receive a Ph.D. in analytical chemistry from Indiana University in 1989.  Since that time he has been employed by the Connecticut Agricultural Experiment Station.  He is an expert in the analysis of organic contaminants in a wide variety of matrixes.  These contaminants can include industrial products such as polychlorinated biphenyls or agricultural chemicals such as pesticides.  The matrixes can include soil, water, air, food products such as fruit and vegetables, and matrices related to honey bees.  He has expertise in the analytical methods used to do these analyses including extraction and cleanup of samples. In addition, his expertise extends to the instrumental methods such as liquid chromatography/mass spectrometry and gas chromatography mass spectrometry used in the analysis of these samples.

Pesticides are thought to be a co-factor in many of the problems facing pollinators.  In addition to acute effects such as a bee kill caused by a misapplication of pesticides they can also potentially cause longer term non-lethal effects.  Therefore, in our studies of pollination security it is important to determine the pesticide exposure of the pollinators.  This is done by taking samples of various matrixes such as the nectar and pollen from a plant, or bees themselves and analyzing those matrixes for pesticides.  Pesticides are extracted from these matrixes by acetonitrile, the extracts are then treated to remove some interfering compounds and then the extracts are analyzed using liquid chromatography/mass spectrometry.  Using these techniques we can detect and quantify a large number of different pesticides that may potentially be present in the sample.  Dr. Eitzer’s role within the pollination security project is to conduct these analyses on the samples submitted by the other collaborators and report back to them the pesticide content of the samples they submitted.