Get up-close to an elusive honey bee disease. 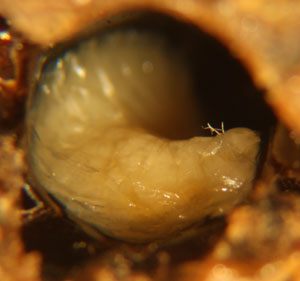 Fig.1: A classic symptom of European foulbrood is a curled upwards, flaccid, and brown or yellowish dead larva in its cell, pictured above.

European foulbrood (abbreviated EFB) is a bacterial disease that effects honey bee larvae before the capped stage. European foulbrood disease is characterized by dead and dying larvae which can appear curled upwards, brown or yellow, melted, and/or dried out and rubbery. The causative bacteria, Melissococcus plutonius is ingested by honey bee larvae after which the bacterium competes for food inside the larvae. If the bacteria out-competes the larva, the larva will die before the cell is capped. Alternatively, the bee may survive until adulthood if the larvae has sufficient food resources. European foulbrood should not be confused with American foulbrood (AFB), which is caused by a different bacteria that produces different symptoms and control requirements.

European foulbrood disease is considered to be more problematic in situations where forage nectar is sporadic, or other situations that result in fewer nurse bees in colonies to feed larvae. At the onset of nectar flow in early spring, forage recruitment of house bees may increase rapidly resulting in few bees in colonies to feed honey bee larvae. Often, when the nurse bee to larvae ratio stabilizes later in the season, or remains stable throughout a season, symptoms disappear. However, this disease can occur throughout a season and will sometimes not clear up on its own. In severe cases, colony death can occur. Also, yearly reoccurrence of EFB from contaminated combs and equipment can occur. The bacteria that causes EFB does not produce spores, but combs contaminated with the bacteria can still reinfect honey bees in subsequent years. 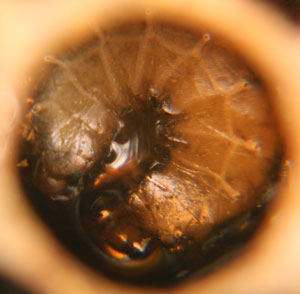 As if the changing nomenclature is not enough to confuse, several other bacteria that are only found in association with M. plutonius were at times credited with causing EFB. This is at least partially due to the fact that these bacteria can overgrow M. plutonius and sometimes seem to improve its growth in lab conditions (Baily 1983). These secondary, infective bacteria present with M. plutonius include; Paenibacillus alvei, Achromobacter (Bacterium) eurydice, and Bacillus laterosporus Laubach (Shimanuki 1997). These bacteria are sometimes considered symbiotic and may cause some of the differences in smell and appearance in infected larvae (Baily 1981). There is suspicion that some of these bacteria may have some causal relationship to symptom onset, but this has never been clearly established (Shimanuki 1997).

Larvae become infected with European foulbrood when they consume brood food that contains the bacteria M. plutonius (Shimanuki 1997). There is also some evidence that transmission may occur from bites of the parasitic mite, Varroa destructor (Kanbar and Engels 2003). Inside infected larva, the bacterial populations concentrate in the food mass in the midgut and the gut peritrophic membrane interface (McKee et al. 2004) where the bacteria then reproduces (Bailey 1983). Depending on the level of infection, and possibly the amount of available food, the infected larva will either survive or die.

The degree of larval mortality, measured in one experiment, was directly related to the duration or amount of bacteria that was fed to the larva. Larvae were found to be more likely to die as increasing amounts of bacteria were fed (McKee et al. 2004). The larvae that survive go on to defecate and pupate, which leaves bacteria on the combs that can be infective for years, even though this bacteria does not produce spores (Baily 1981, 1983). Surviving larvae will become adults with generally lower weight and delayed pupation when compared to their uninfected counterparts, supporting the idea that infection creates higher energy demands (Baily 1960, Mckee et al. 2004). It is noted that an increased food supply from adequate numbers of nurse bees can reduce larval death and observed symptoms. With adequate amounts of food, larvae are more likely to survive (Baily 1983). This may explain why expression of the disease can change sporadically year to year, and season to season, depending on the balance of nurse bee to larvae ratio and thus, the amount of brood food made available to the larvae.

Fig.6: Pictured are off-colored to dull white larvae from a hive infected with European foulbrood. Note the somewhat pronounced tracheal tubes in the melted larvae to the right. 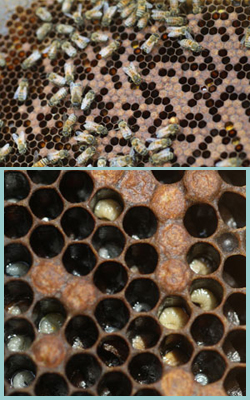 Fig.4: Pictured is a spotty brood pattern with larvae discolored. Taken from a hive with European foulbrood.

In hives infected with EFB, dying and dead larvae can become yellow and then brown. A sour, fishy odor may be present or not. Tracheal tubes can become more apparent as the larvae flattens or ‘deflates'(Fig.2). The larvae can also twist as they die and can die curled upwards (fig.1). Other times they melt in their cells and will generally be mushy. The remains can be slightly ropey with threads less then 1.5cm long (Shimanuki 1997). To test if the remains are ropey, a toothpick, match, or small stick can be probed into the cell and removed (fig.5). Once dried, a rubbery scale remains.

Fig.5: Probing a larva melted by European foulbrood. Note that the melted larva is usually not ropey.

Diagnosis of infection with European foulbrood should begin with visual inspections of the above symptoms. Beekeeper’s inexperienced with EFB would likely benefit from confirmation of diagnosis before taking action, in case the infection is another bacteria, virus, chilled brood, or some other situation. Confirmation could occur through their state sponsored apiary inspection program, if available, or by the use of an inexpensive and easy to use diagnostic test kit, or sending a sample to the USDA Beltsville Bee Research Laboratory for testing.

Diagnostic field validation kits for EFB are based on monoclonal antibodies of M. plutonius (Tomkies et al. 2009). Samples sent to the USDA Beltsville Bee Research Laboratory for diagnosis will be examined microscopically for the presence of M. plutonius or one of the associated bacteria, which have often eliminated M. plutonius (Smith 2009). Other methods to confirm M. plutonius include: Enzyme-linked immunosorbent assays (ELISA), (Pinnock and Featherstone 1983), a hemi-nested PCR assay (Djordjevic et al. 1998), and quantitative real-time PCR (Roetschi et al. 2008).

European foulbrood occurs on all continents where honey bees are kept (Shimanuki 1997). During the early 1980’s in the U.S., it was historically severely problematic in New Jersey during the spring cranberry and blueberry pollination season. This created some suspicion that low nutrition in pollination fields were having an effect on EFB occurrence, but this did not seem apparent in trials conducted by the USDA (Herbert and Shimanuki 1984). This regional outbreak in New Jersey pollination fields was not consistent. Herbert et al. (1987) reported that in 1986-87, European foulbrood could not be found in the New Jersey, USDA test colonies, while previous to 1986 the disease was a serious problem.

Baily (1983) explains the occurrence of EFB as having the propensity, “…to remain inapparent, then to appear, sometimes in a very severe form, and then frequently to disappear spontaneously, especially after midsummer…”. Thompson and Brown (2001 see summary) indicate that yearly recurrence of the disease in infected apiaries is particularly problematic in the UK. 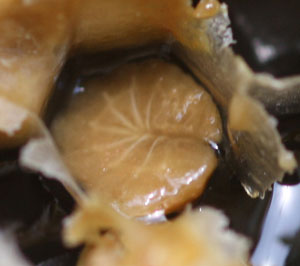 Fig 7: A larva with its cell torn down for visibility, in a bee hive infected with European foulbrood

There are limited options for possible cultural control of this disease. However, as noted above, treatment may not always be necessary in all cases if conditions change that result in disappearance of the disease. Control is sometimes necessary though. Re-queening the colony may have some benefit, due to a break in the brood cycle, and supplying a queen that is more prolific (Shimanuki 1997). There is some evidence of genetic resistance towards the disease (McKee et al. 2004, Shimanuki 1997), but there are no known lines/breeds that are resistant to EFB, including lines bred for hygienic behavior (Spivak per comm). Hygienic lines are however clearly resistant to American foulbrood.

Due to the infectious activity of the bacteria on contaminated combs, moving combs and equipment should be expected to cause cross contamination. In some countries, destruction or sanitation of infected combs and equipment is required. As of 2008 in Switzerland, European foulbrood is a notifiable disease which requires sanitation of apiaries, without the use of antibiotics. This includes the process of burning every infected and weak colony. In a Swiss study, Roetschi et al. (2008 see summary) showed that this process was not very effective as 5 out of 8 sanitized apiaries were reinfected one year later. However, destroying contaminated equipment has proven effective in another study (see “Chemical control”). 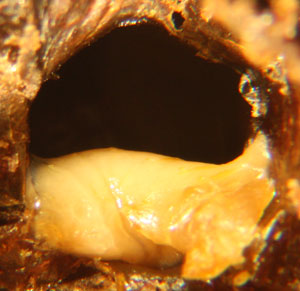 Fig.8: A melted larva in its cell from a hive infected with European foulbrood.

In the US, as of this writing 2009, the antibiotic Oxytetracycline HCL soluble powder (OTC), trade name Terramycin is the only product labeled for the control of European foulbrood. Various concentrations are available. This means that users of this product should pay particular attention to the product label to deliver the correct dose, or contact their local state beekeeping inspector or extension specialist for assistance.

A promising method for controlling European foulbrood has been developed in the U.K., which involves the combination of removing contaminated equipment with the “shook swarm” method along with the use of antibiotics (Waite et al. 2003a see summary). As mentioned above, recurrence of the disease can be a major problem. This method seems to help control recurrence the following year, in addition to disease control the year implemented. See the research summary, Shook Swarm and OTC Antibiotics for European Foulbrood Control for more information. A trial of this method in the U.S. was not found.