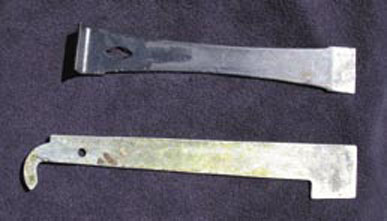 There are two types of metal hive tools used to pry apart hive parts that bees regularly glue together. The traditional hive tool resembles a prybar with a flat end and a bent scraper end. The other tool is called a frame lifter (or Maxant tool) because one end is inserted under a frame end bar while resting on the adjacent frame. The downward motion of the tool uses leverage to loosen that end of the frame. These work very well to remove the first frame during an inspection. 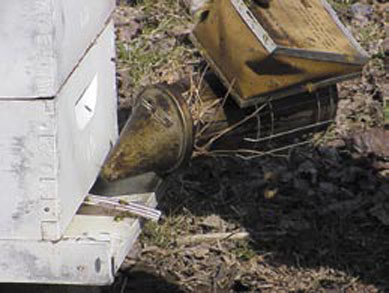 When smoking a colony, position the smoker spout at the colony entrance. 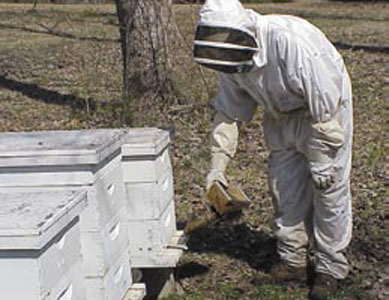 Use small puffs of smoke.

A smoker is a very useful tool, allowing the beekeeper to produce smoke that “calms” the bees. A smoker has a cylindrical chamber with a bellows attached, topped with a hinged lid formed into a spout. The chamber, where a fire is built, is made of metal, usually stainless steel.

When the lid is closed,and the bellows compressed, a stream of smoke can be directed wherever it is needed. We suspect the calming effect occurs because smoke causes bees to engorge with honey, then they are less likely to be defensive. In addition, the smoke may disorient and confuse the bees by interfering with sensory reception, especially
for odor.

Smoke can also be used in small amounts to
direct bee movements. For example, a few small, wellplaced
puffs will cause bees to move away from the
end bars long enough for the beekeeper to remove the
frame without crushing a bee or two in the process.

Excessive smoke disrupts the colony, causing too
much bee movement on the frames. This makes some
activities, such as queen finding, much more difficult.
Pine needles, wood chips or shavings, dried grass
or leaves, burlap fabric or cotton cloth may be used as
fuel in the smoker. Use what works best for you and
is readily available. If you use burlap or cloth, make
sure it hasn’t been treated with any pesticides or other
chemicals. Do not use materials of animal origin, such
as wool fabric, fur or feathers.