The Bee Informed Partnership conducts an annual Winter Loss Survey for beekeepers on, or near, April 1st. To participate in the survey, sign up to be notified by email here.

This data has been collected since the Apiary Inspectors of America winter loss survey of 2006-2007. See documents below for previous year’s results.

Note: This is a preliminary analysis. Sample sizes and estimates are likely to change. A more detailed final report is being prepared for publication in a peer-reviewed journal at a later date.

The Bee Informed Partnership (http://beeinformed.org), in collaboration with the Apiary Inspectors of America (AIA) and the United States Department of Agriculture (USDA), is releasing preliminary results for the ninth annual national survey of honey bee colony losses. For the 2014/2015 winter season, a preliminary 6,128 beekeepers in the United States provided valid responses. Collectively, these beekeepers managed 398,247 colonies in October 2014, representing about 14.5% of the country’s estimated 2.74 million managed honey bee colonies1.

About two-thirds of the respondents (67.2%) experienced winter colony loss rates greater than the average self-reported acceptable winter mortality rate of 18.7%. Preliminary results estimate that a total of 23.1% of the colonies managed in the Unites States were lost over the 2014/2015 winter. This would represent a decrease in losses of 0.6% compared to the previous 2013/2014 winter, which had reported a total loss estimated at 23.7%. This is the second year in a row the reported colony loss rate was notably lower than the 9-year average total loss of 28.7% (see Figure 1). 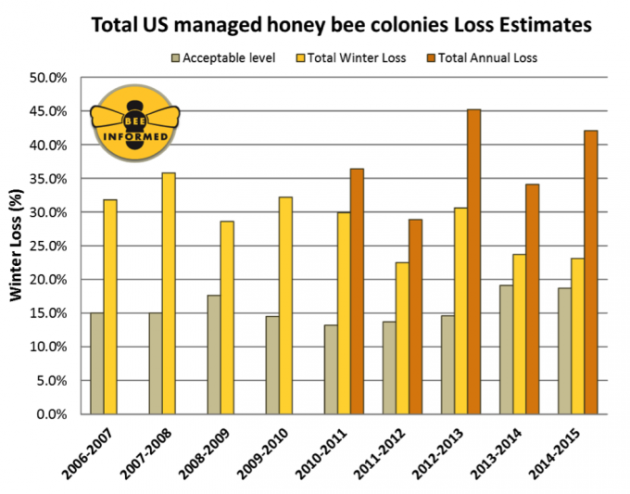 Figure 1: Summary of the total colony losses overwinter (October 1 – April 1) and over the year (April 1 – April 1) of managed honey bee colonies in the United States. The acceptable range is the average percentage of acceptable colony losses declared by the survey participants in each of the nine years of the survey. Winter and Annual losses are calculated based on different respondent pools.

Beekeepers do not only lose colonies in the winter but also throughout the summer, sometimes at significant levels. To quantify this claim of non-winter colony mortality of surveyed beekeepers, we have included summer and annual colony losses since 2010/2011. In the summer of 2014 (April – October), colony losses surpassed winter losses at 27.4% (totalsummer loss). This compares to summer losses of 19.8% in 2013. Importantly, commercial beekeepers appear to consistently lose greater numbers of colonies over the summer months than over the winter months, whereas the opposite seems true for smaller-scale beekeepers. Responding beekeepers reported losing 42.1% of the total number of colonies managed over the last year (total annual loss, between April 2014 and April 2015). This represents the second highest annual loss recorded to date.

As in previous years, colony losses were not consistent across the country, with annual losses exceeding 60% in several states, while Hawaii reported the lowest total annual colony loss of ~14% (see Figure 2). 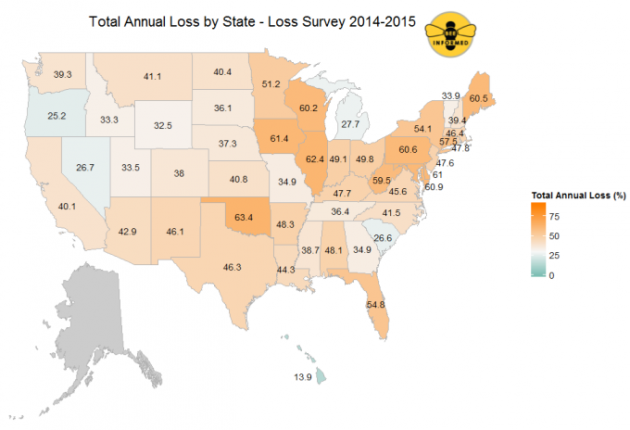 Figure 2: Total annual loss (%) 2014-2015 by state. Respondents who managed colonies in more than one state had all of their colonies counted in each state in which they reported managing colonies. Data for states with fewer than five respondents are withheld.

This survey was conducted by the Bee Informed Partnership, which receives a majority of its funding from the National Institute of Food and Agriculture, USDA (award number: 2011-67007-20017).