Figure 1: Melissococcus plutonius is a short, lancet-shaped bacterial cell which does not form spores. The cell occurs singly, in pairs, or in chains.

Also, a field test kit can be employed, which is described in the following web-page

For a definitive diagnosis, a brood sample should be mailed to the USDA-ARS Bee Research Laboratory at Beltsville Agricultural Research Center for a microscopic examination. 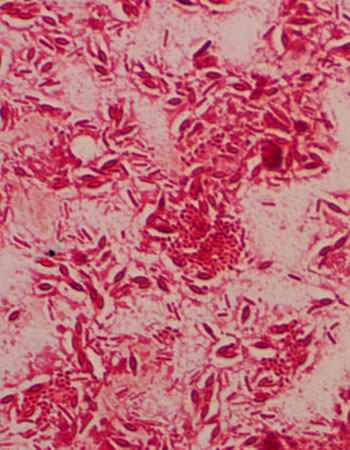 Between the years 2008 – 2004, the Beltsville Bee Research Laboratory examined between 799 – 1062 brood samples each year. From these samples, the following percentages were found to have EFB:

Bee disease diagnostics from the Beltsville Bee Research Laboratory is free of charge, but samples are only accepted from the United States and Canada. A sample of comb at least 2 x 2 inches with as much of the effected brood as possible should be sent. This sample should not contain honey. The sample should be wrapped in paper and mailed in a heavy cardboard box. Plastic, wax, or foil wrappings should not be used as this leads to decomposition and the growth of mold.

Download a .pdf of Diagnosis of Honey Bee Diseases here