Learn about some of the latest research into bee decline.

by Katherine Aronstein1 and Angela Douglas2

In recent years, an urgent demand for answers to declining bee populations has spurred an avalanche of publications attributing the disappearance of managed bees to a variety of causes (e.g., cell phones and microwave technology, earth’s magnetic field, etc). Although most of these “discoveries” were quickly rejected by the scientific community, they may have temporarily confused the public and funding agencies, and led to a belief that the Colony Collapse Disorder (CCD) problem has been solved. A strong temptation to provide an instant panacea for the decline in world’s bee populations still creates heightened incentives in producing sensational news. However, this problem probably relates more to human nature rather than research efforts.

A critical evaluation of a research publication is key in preventing further confusion. To help the public interpret scientific results, a critical analysis of CCD-related publications can be found at Randy Oliver’s ScientificBeekeeping.com web site. However, creating the right conditions for well designed and executed studies requires an integration of expertise and funding that ultimately lead to the best research quality assurance.

Tackling complex issues requires a mixture of skills and integration of academic and applied science. This is where the multi-institutional collaboration of academic and extension research groups becomes relevant to repair perceptions and to offer new grounds for hope to solving the problem. Several years of work consolidated under the Coordinated Agricultural Project (CAP) has allowed us to do just that. In a unique collaboration of universities and government scientists, we were able to apply a diverse set of skills and expertise to solving problems related to the decline of bees. For example, we implemented a coordinated multi-state approach to improving bee management in stationary settings. This part of the project is not only the most critical element of the CAP (Lead, Keith Delaplane), but will also become the most critical element in the analysis of stationary vs. migratory beekeeping practices, currently conducted under USDA-ARS Area Wide Project (Lead, Jeff Pettis).

Within the overall CAP structure, smaller groups are focusing on a variety of specific questions, including developing genetic markers for breeding a better bee, looking at the synergistic effects of diseases, parasites and pesticides; studies that are regularly described in our column in this magazine. Concluding reports of the CAP studies will be presented later this year at the Entomological Society of America meeting in Knoxville, Tennessee (November 11-14, 2012).

Bee health and colony productivity remain at the center of our attention. Although it will take some time to complete and analyze our findings, the current consensus among most scientists is that global collapse of managed bees is caused by a combination of different factors that may compromise bee health by reducing their ability to fight diseases, impairing bees’ ability to learn and retain memory, and therefore affecting basic functions of the colony. Among these factors, some show a stronger impact on the colony health than others. It is not surprising that Varroa, once again, surfaces as one of the highest impact factors affecting colony survival.

Varroa syndrome is a complex problem and historically has been a key concern for beekeepers. It is not just the feeding activity of the parasite that demises the colony. Instead, it’s the co-evolved relationship of the parasite with viruses that ultimately affects the ability of nutritionally depleted bees to resist this coordinated attack.

How does Varroa parasitism impact health of bees? We have recently investigated this in a small-scale study conducted in Texas in 2010. We began our experiment by infesting clean bee colonies with known numbers of Varroa mites and then monitored the level of mite infestation on a monthly basis thereafter. We used all new equipment and a reliable food source. Also, no chemicals were used in or near the colonies to reduce exposure to pesticides. Following mite infestation, samples were collected on a monthly basis. Pupae and newly emerged adults were scored as Varroa-infested or uninfested, and foragers were collected as they approached the colony entrance. Individual bees were weighed, and then analyzed in two molecular laboratories equipped for different types of analysis. The effects of Varroa parasitism on bees’ immune system were analyzed at the USDA laboratory in Weslaco, TX and the levels of nutritional indices, including protein, sugar and lipid contents were measured at Cornell University, NY.

Varroa parasitism had no significant effect on the expression level of honey bee antimicrobial peptides.

It is well known that healthy animals can build up a variety of immune responses to microbial infections and septic wounds, and rapid production of antimicrobial peptides (AMPs) is one of the steps in this process. AMPs are small bioactive molecules normally released in blood of infected animals. However, immune suppressed individuals mount much less pronounced responses. In an important set of experiments, scientists [1] injected bees with heat-killed bacteria and found that the AMP response was suppressed in Varroa–parasitized bees. These data suggested that Varroa infestation may suppress the bee immune system.

This study on field colonies of honey bees gave very different results. There was no suppression of AMPs in Varroa-parasitized bees relative to uninfested bees (in fact, some AMPs were up-regulated), indicating normal function of this part of humoral immunity. Importantly, all tested bees had various levels of Deformed Wing Virus (DWV) with the highest titers found in bees with visibly deformed wings, clinical signs of DWV (Fig 1). Consistent with the conclusion that Varroa does not necessarily affect the honey bee’s ability to activate immune-related molecules, another study [2] has demonstrated that Varroa parasitism tends to affect genes involved in olfaction and neuronal sensitivity, indicating the importance of behavioural (e.g., grooming, removal of infested pupae) rather than immune responses for honey bee survival.

Similar to previously published results, we found that bees in Varroa infested colonies have depressed body weight. Importantly, uninfested bees collected from highly infested colonies also had reduced weight in comparison to those collected from colonies with lower levels of infestation (Fig 2), indicating that Varroa can affect the wellbeing of an entire colony, even uninfested individuals. Colony level effects are uniquely characteristic to social organisms that collectively tend for their young, share food resources, and defend their colony. These effects may explain a decline of the entire bee colony under extreme stress. 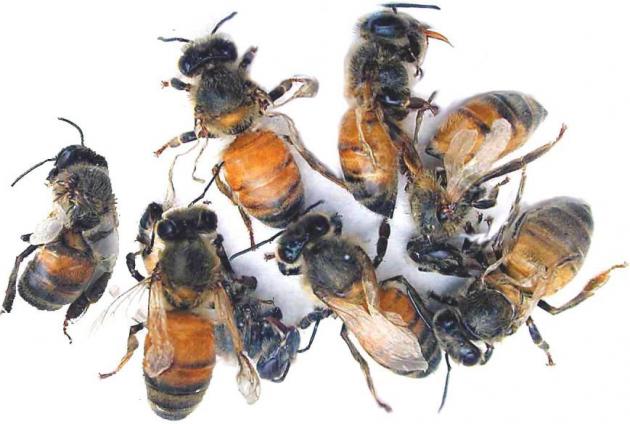 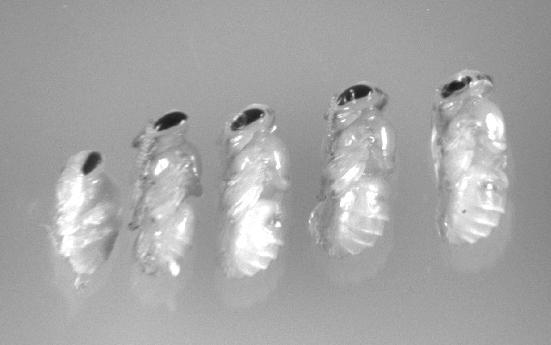 Weight of brood, newly emerged bees and foragers are good predictors of bees’ ability to perform normal colony functions, especially their ability to fly, a high energy demanding task. It has previously been demonstrated that underweight bees tend to become precocious foragers with an increased incidence of drifting off-site [3] , therefore contributing to a rapid dwindling of adult population in Varroa-infested colonies.

The role of diet in helping bees tolerate Varroa.

The relationship between animal health and nutrition is a fast developing field of research. It is well known that malnutrition weakens animals’ ability to survive under stress. Although several diets have been developed to supplement bee nutrition, scientists continue improving these supplements in an attempt to provide nutritional support equal to or better than that achieved with plant pollen. It seems that natural pollen consistently outperforms artificial diets. Nutrients in natural pollen contain a variety of proteins, lipids, amino acids, vitamins and minerals, all of which play crucial roles in bee health. Molecular studies showed that diets containing natural pollen helped to activate essential metabolic pathways in bees and had positive influence on the expression of genes affecting bee longevity and production of the antimicrobial molecules. Therefore, improving bee supplements and developing season-specific feeding regimens are critical for the sustainability of beekeeping. However, the role of supplemental feeding in improving survival of Varroa –parasitized colonies still waits conclusive evidence. The complexity of this issue is aggravated by the fact that some bee viruses have been implicated in the inhibition of protein metabolism essential for bee health. The “Big Unknown” is, therefore, whether supplemental feeding would be able to reverse the inhibiting effects of Varroa-transmitted viruses. One study [4] indicates that harmful effects imposed by viruses were not reversed by supplemental pollen intake. This could be an impediment to the development of a nutritional support for Varroa infested colonies, and undoubtedly will be the focus of future investigations.

To help beekeepers understand the complexity of these problems, we highly recommend a newly released book that has already received glowing reviews from its readers (http://www.bioone.org/doi/pdf/10.1653/024.095.0145). The book is entitled “Honey Bee Colony Health (Eds., SAMMATARO, D. AND YODER, J. A.) 2012. Twenty one chapters of this book were written by leading scientists in the field discussing a wide range of issues including bee nutrition, diseases, pests and parasites and many other subjects related to bee research.

1.         Yang, X. and D.L. Cox-Foster, Impact of an ectoparasite on the immunity and pathology of an invertebrate: Evidence for host immunosuppression and viral amplification Proceedings of the National Academy of Sciences of the United States of America, 2005. 102(21): p. 7470-7475.