Nosema apis and Nosema ceranae: A comparative study in the honey bee host

Nosema apis and Nosema ceranae are genetically related microsporidian pathogens that infect the western honey bee. Both species cause chronic disease that that can shorten the adult lifespan and impact hive health and productivity, and when infections reach high levels in apiaries, honey production and pollination services can be severely impacted (Bailey and Ball, 1991; Fries, 1993). In recent years, N. ceranae appears to have become the dominant species in the western honey bees around the globe but the mechanisms of replacement are not fully understood (Huang et al., 2008; Klee et al., 2007). 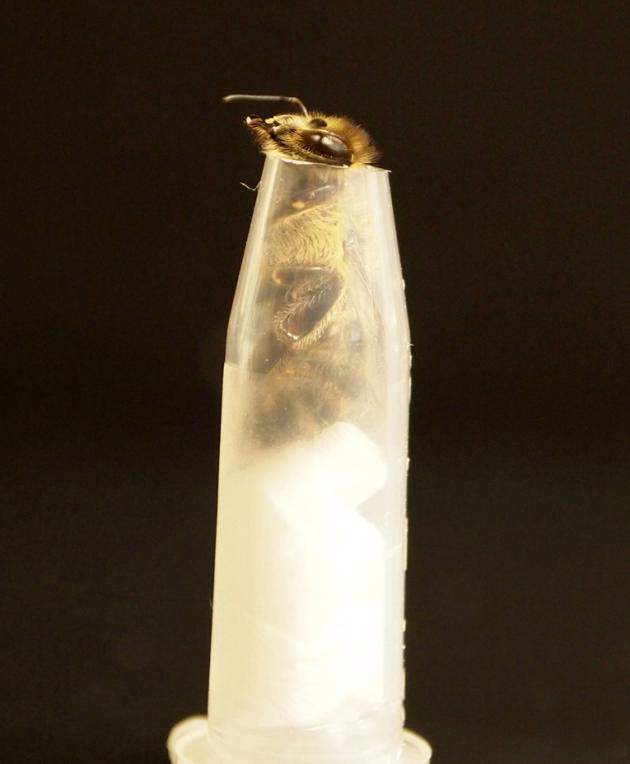 N. apis infects only the adult stage of honey bees and only reproduces in the cells of the host’s midgut where food is absorbed (Bailey and Ball, 1991; De Graaf and Jacobs, 1991; Fries, 1993). Most other Nosema species, including the bumble bee pathogen, Nosema bombi, develop in most body tissues, causing systemic infections rather than being restricted to one tissue. Many Nosema species infect the ovaries of reproductive female hosts and are transmitted from the infected females to their offspring (Becnel and Andreadis, 1999) but, although N. apis infection in honey bee queens may affect the development of eggs and even stop reproduction (Liu, 1992), the pathogen is not transmitted through the eggs to the offspring (Webster et al. 2008).

Like N. apis, N. ceranae was described as a midgut pathogen of adult bees (Fries, 1996; Fries, 2010), but researchers have observed microsporidian DNA signals in tissues of the head and in other body tissues when using PCR diagnosis, a very sensitive molecular technique (Chen et al., 2009; Copley and Jabaji, 2012; Gisder et al., 2010). With the exception of the midgut, however, neither infective spores nor developmental forms of N. ceranae have been microscopically observed in these tissues (Gisder et al., 2010).

We compared the development of N. apis and N. ceranae in honey bees because the possibility that N. ceranae infects tissues like the hypopharyngeal glands and salivary glands in the head capsule could have implications for how N. ceranae  is impacting bee health and how it is transmitted between individual bees. We are also attempting to understand why N. ceranae appears to have replaced or competed with N. apis in most honey bee populations in the US (Chen et al., 2009). We were particularly interested in clarifying which body tissues are infected, as well as comparing the number of infective spores each microsporidian species produces. We used genetic tools, PCR and quantitative PCR (qPCR, a method for determining the number of pathogens in a host by measuring DNA), to detect N. ceranae and N. apis in the tissues, but we redesigned the methods used to rear the bees and methods for removal of body tissues to perform the evaluations.

We collected Nosema ceranae from honey bees in campus apiaries at the University of Illinois, Urbana-Champaign, and Dr. Tom Webster at Kentucky State University provided N. apis spores.  Honey bees were reared in small groups in plastic cages. We fed an infective dosage of either N. apis or N. ceranae spores to groups of 30 honey bees and reared them on sugar water for approximately 2 weeks. The bees were then killed and surface sterilized with diluted bleach and all major body tissues were examined at 400x with a compound microscope. We also extracted the contents of the hindgut where spores are contained in fecal material. Because we can distinguish spore stages based on light refraction using specialized microscope lenses and condenser called “phase contrast”, we were able count mature infective spores that appear brightly shining; immature spores and “primary” spores that have a grayish cast; and primary spores that have already germinated and that appear empty and gray with dark cell walls. Primary spores are formed in the early stages of infection and germinate inside the cells in which they develop, ensuring transmission of the infection from cell to cell inside the host.

We noted that numerous mature spores were always found in the mouthparts of caged infected bees. These spores could contaminate the tissues of the head during dissection. We therefore designed a restraint system that was used isolate individual bees from colony members and eliminate grooming and other hygienic behaviors (Fig. 1a); a method intended to determine whether spores in the oral cavities were due to grooming or were due to infection of the foregut and/or regurgitation. The restrained bees were fed N. ceranae spores in sugar water (Fig. 1b) and fresh sugar water was provided every 2 days. The infected bees were held for 14 days to evaluate infections in the midgut and to determine whether other body tissues were involved. We tested all major body and head tissues with microscopic observations and conducted PCR to detect Nosema DNA.

Most bees we used in our experiments did not defecate inside their cages, so the different spore types that accumulated in the hindgut contents indicated the progress of infection in midgut tissues. N. ceranae-infected bees produced more mature infective spores (80-95%) than N. apis-infected bees (57-83% mature spores). The ratio of N. apis mature spores to immature/primary spores did, however, increase during the infection period. Because immature spores are not yet infective, and primary spores are only infective to other cells within a bee’s midgut tissues and are not transmissible among hosts, N. ceranae may have a competitive advantage with its higher ratio of mature infective spores. 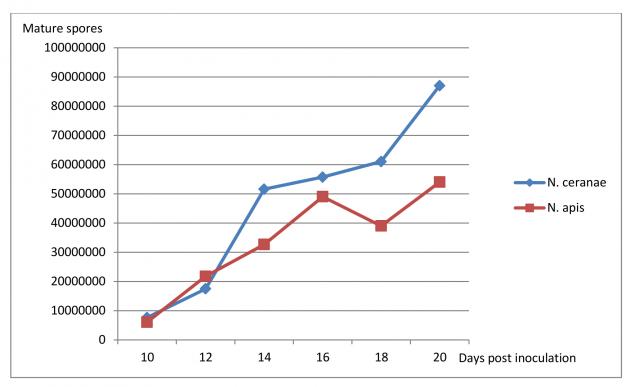 Figure 2:  Accumulation of mature spores in hindgut of bees infected with Nosema apis or Nosema ceranae.

In previous studies, DNA was detected in head tissues of N. ceranae infected bees, but researchers had not observed any early microsporidian stages or spores in these tissues in either N. apis or N. ceranae infected bees. By restraining the bees and rearing them individually so they could not groom their sisters, the mouthparts remained uncontaminated and no N. apis or N. ceranae DNA was detected in these samples of head tissues, nor was N. ceranae DNA was detected in hemolymph (blood) samples collected from the head or abdomen. This suggests that N. ceranae cannot exit the midgut to infect the blood or other tissues, nor are spores regurgitated; and, indeed, spores and DNA of N. apis and N. ceranae were detected only in the midgut cells of the restrained bees (see Huang and Solter, 2013 for research details).

We determined that, although N. ceranae infects the same tissue as N. apis and, in our studies, was not more virulent, the timing of the life cycle and production of more infective spores may be factors that allowed N. ceranae to successfully compete with N. apis and become the dominant microsporidian species in honey bees.