Jointly published in the American Bee Journal and in Bee Culture, October 2011.

There is no question that honey bees are surrounded by a dizzying variety of chemicals (Mullin et al. 2010).  However, just because a chemical is present does not necessarily mean that it poses a threat.  We humans often choose to surround ourselves in chemicals, known as drugs, that help us to live longer and healthier lives.  Similarly, the most abundant chemicals in bee hives are the ones that are placed there deliberately by beekeepers as therapeutic drugs to control bee diseases and parasites.

Despite therapeutic intentions, drugs may become harmful if too much of the drug is used – an ‘overdose’ in human terms.  Drugs can also become harmful if they interact with other drugs a person is taking.  Drug interactions are a major concern for doctors and pharmacists, which is why medical professionals always ask the question “What drugs are you taking?” As a beekeeper, and your bees’ medical professional, you also need to watch out for drug interactions and need to be asking your bees, “What drugs are you taking?”  In most cases you already know the answer to that question, since you, the beekeeper, are the one that administers drugs to control Varroa, American Foulbrood or Nosema.

But which drug combinations does a beekeeper need to watch out for?  In my first CAPS update (Johnson 2009), I reported on our work at the University of Illinois at Urbana-Champaign where we discovered a potentially deadly interaction between tau-fluvalinate (the active ingredient in Apistan™ and Mavrik™) and coumaphos (the active ingredient in Checkmite+™).  Over the last two years Dr. Marion Ellis and I have continued to look for interactions between a wider array of beekeeper-applied drugs at the University of Nebraska-Lincoln.

Dr. Ellis and I looked for interactions between six miticides.  In addition to tau-fluvalinate and coumaphos, we  included amitraz (active ingredient in Apivar™ and Taktik™ ), fenpyroximate (Hivastan™ and FujiMite™), oxalic acid and thymol (ApiLive Var™ and ApiGuard™).

To test for interactions between miticides, we topically treated small groups of bees with a uniform low, sublethal dose of the first miticide, then followed up with a range of doses of the second miticide (Figure 1).  We included low doses of miticide that killed no bees, medium doses that killed some of the bees and high doses that killed all of the bees.  An interaction was determined if an otherwise non-lethal dose of the second miticide suddenly began killing some or all of the bees after those bees had been treated with a sublethal dose of the first miticide.  As it is difficult to kill bess with oxalic acid this miticide was only applied as a sub-lethal first-treatment and could not be used to kill bees previously treated with other miticides

None of the miticides came away clean from the 25-pairwise miticide tests (Figure 2).  We validated our previous work demonstrating interactions between tau-fluvalinate and coumaphos and this interaction was potentially the most deadly of any miticide combination tested. Tau-fluvaliante became 20-times more toxic to bees previously treated with coumaphos.  Interestingly, tau-fluvalinate became more toxic no matter what other miticide it was paired with, while amitraz never became more toxic (though amitraz could make other miticides more toxic).

Miticide interactions with antimicrobial drugs are of particular concern because bees may to be treated for Varroa at the same time as they are treated for other diseases.  The antimicrobials we tested for interactions with miticides were fumagillin (the active ingredient in Fumagilin B™), which is used for control of Nosema; and oxytetracycline (Terramycin™) and tylosin, both of which are used to control American Foulbrood.   We fed the antimicrobial drugs to groups of 3-day old adult bees in sugar-water at the maximum recommended dose, then treated these bees with a range of miticide doses. 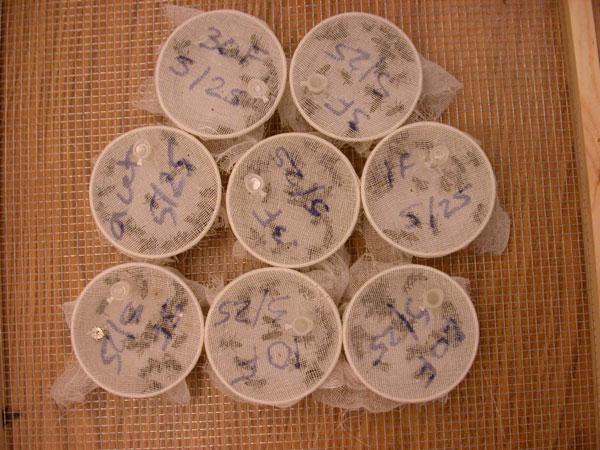 Figure 1. Groups of bees used for a lab miticide interaction experiment.  In this picture, each cup contained 20 bees that were  treated with the recommended dose of fumigillin, followed by different doses of fenpyroximate, or no fenpyroximate as a control.   Bees were fed sugar water through a tube placed in the cheesecloth covering each cup.  The number of bees surviving were counted 24 and 48 hours after treatment application.  This represents a single trial from the 250 trials carried out to produce Figure 2.

While it is true that beekeepers do not deliberately treat their colonies with fungicides, it is possible for bees to be exposed to large doses of fungicides in the course of foraging.   Fungicides are generally not very toxic to bees which means that they may be applied while plants are blooming and therefore when bees are present.  Chemical analyses show that one fungicide, chlorothalonil (the active ingredient in Bravo™), is nearly as ubiquitous and abundant in bees and beehives as the miticides that are placed there deliberately (Mullin et al. 2010).  Given the high likelihood that bees might be exposed to high concentrations of a fungicide at the same time they are undergoing miticide treatment, we decided to study the  possible interactions between miticides and fungicides.

We treated bees with a large dose of one fungicide followed by one of a range of miticide doses.  Fungicides used included: a combination pyraclostrobin and boscalid (the active ingredients in Pristine™), chlorothalonil, and the sterol biosynthesis inhibiting (SBI) fungicide prochloraz.

While Pristine™ and chlorothalonil are often used in flowering crops during bloom,  prochloraz is primarily used in greenhouses and it is unlikely that honey bees will ever come into contact with it.    Prochloraz was chosen as a representative of the large family of SBI fungicides primarily because there have been previous reports of interactions between this fungicide and other insecticides (Pilling et al. 1995). 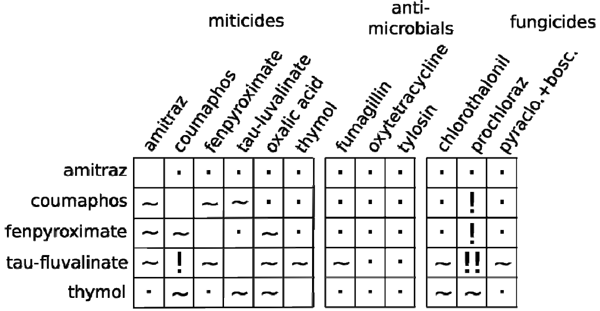 First, it should be noted, all of our interaction tests took place in a lab using 3-day old adult bees and a single application of a high dose of miticides and fungicides.  It is hard to say if these lab results reflect what happens in real colonies as it is possible that, in the real world, bees never come into contact with enough miticide or fungicide to cause any sort of adverse interaction.  On the other hand, real colonies are exposed to miticides and fungicides for weeks at a time, rather than a single dose as in our lab tests, and sublethal pesticide exposure may have more subtle effects on colony fitness through effects on brood survival and development (Wu et al. 2011), and adult behavior, longevity and reproductive success (Desneux 2006).

We are currently following up on the most potent interaction observed – that between tau-fluvalinate and the SBI fungicides – in a large scale field experiment.  We are treating 50 two-frame nucleus colonies with Apistan™ (tau-fluvaliante),  Rally™ (myclobutanil) and a combination of the two, as well as control treatments (Figure 3).  We are tracking the success of these colonies in a number of ways, including intensive tracking of brood survival and development using a new technique involving digital photos and a web-based scoring system.  Anyone is welcome to help us score the thousands of brood photos we have generated by simply visiting http://broodmapper.com where you can learn how you can volunteer a bit of your time to contribute to this experiment.

While we wait for results from the field experiments there are a few simple things beekeepers can do to avoid the most dangerous drug interactions identified in our laboratory experiments.

First, never treat with more than one miticide simultaneously.  Unfortunately, many of these miticides find their way into beeswax where they take up permanent residence, so avoiding multiple treatment may not be as easy as it sounds.  The persistence of “legacy miticides” in the wax creates a situation where bees may still be exposed to low doses of last year’s  miticide treatment while this year’s treatment is being applied.   At this point it is not known what quantity of miticide can reemerge from contaminated wax and if that amount  is enough to cause harmful interactions, though previous research has shown that brood reared in old miticide contaminated combs suffer delayed development (Wu et al. 2011).  Since repeated miticide treatment will steadily increase the concentration of miticide in the wax it may be prudent to cull the oldest, most contaminated brood frames in apiaries with a long history of miticide use.

Finally, do not use homemade formulations of chemical miticides.  The doses that bees receive from barrel gasket or shop towel formulations are unknown and may be high enough that they could cause harm to your bees when combined with fungicides and legacy miticides in the wax.

The rare nugget of good news is that, in general, miticides do not appear to interact with drugs used against American Foulbrood and Nosema.  Our lab results indicate that miticides can be applied simultaneously with antimicrobials, at their recommended doses, without worry about drug interactions.

We still do not know about the potential for harmful interactions posed by many of the chemicals found in the hive environment.  The list of chemicals detected in bee hives could keep us busy testing different combinations of chemicals for decades.  We have attempted to focus our effort on testing interactions between the most abundant chemicals found in beehives.  We have been particularly interested in finding interaction between miticides, not only because these drugs are the most abundant chemicals in the hive, but also because they are among the few chemicals in the bees’ environment over which the beekeeper has direct control.  To apply or not apply a particular drug is ultimately a decision left to the bee’s medical professional: the beekeeper.  Our goal is to provide beekeepers with the best information we can to help them make that decision. 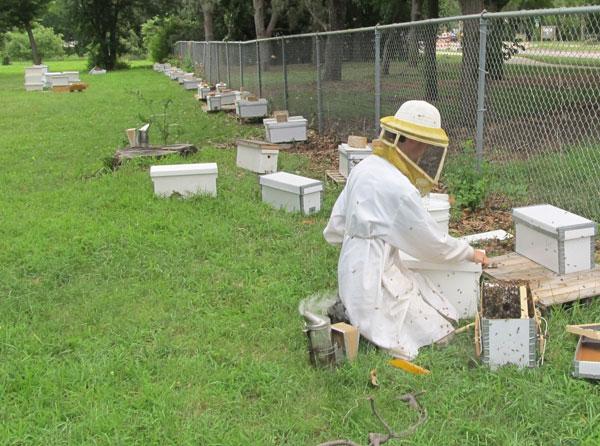 Figure 3. Nucleus colonies at the University of Nebraska-Lincoln that are being treated with tau-fluvalinate, myclobutanil, a combination of the two, or a control treatment to test for potential harmful interactions.