When one looks into a bee nest, three different and distinct adult bees and three immature stages can be seen. The three adult stages present in a bee colony are the queen, the worker and the drone. Queen and workers are females, the two members of the caste system characteristic of eusocial insects. They have different tasks – termed division of labor. The male bee adult is called a drone.

The queen is a fully-developed female whose two functions are to lay eggs and to produce chemicals that help maintain colony cohesion and regulate colony reproduction. The queen is very specialized for these duties and cannot survive alone or perform the usual basic necessities such as feed herself, groom her own body hairs or leave the hive to excrete waste. A colony has a single queen, although for short periods there may be a mother-daughter queen situation in a colony or multiple, newly emerged (virgin) queens present. Queens usually live two or more years.

The male bee or drone is bigger than the queen and roughly barrel-shaped. He has very large eyes that meet at the top of the head. The drone is a haploid adult, developing from an unfertilized egg (termed parthenogenesis or haplodiploidy) a situation often found in the insect order Hymenoptera. Drones mate with virgin queens. They do not lay eggs, do not work or otherwise assist in hive activities. Drones gather on comb just outside the brood area and are not very active inside the hive. They move about only for 2-4 hours in the afternoon when they leave the hive to mate. Few drones actually mate and those that are successful die in the process. A drone usually lives about one month.

The vast majority of the adult population in the bee hive are workers. Like the queen, they are females but they lack full development of their reproductive organs. Worker bees differ in several anatomical aspects from queens including smaller size, possession of pollen baskets on hind legs, wax glands on the abdomen and mandibular glands that are unable to produce the queen pheromones. 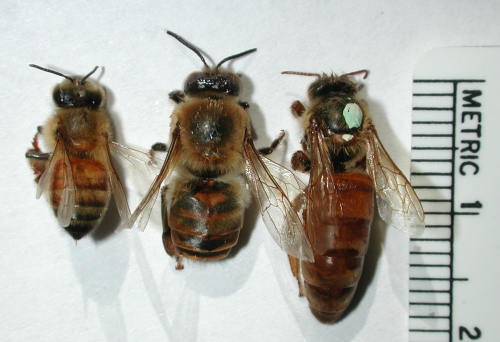 A worker, a drone, and a queen. All recently killed by freezing. The queen was laying eggs before sacrificed, as can be seen by her large abdomen. The queen in this picture is marked for easy identification in a populous colony.(c) Zachary Huang [[1]]

Back to Basic Bee Biology for Beekeepers table of contents

Source:
The above text is taken from The Mid-Atlantic Apiculture Research & Extension Consortium, Basic Bee Biology for Beekeepers; Fact Sheet,MAAREC Publication 1.4 March 2004. You can download this factsheet and others at the MAAREC website