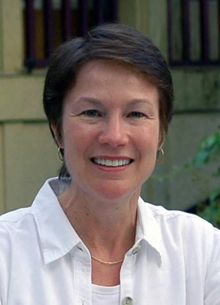 Microsporidian disease of honey bees, variously named “Nosema disease”, “nosematosis” and “nosemosis”, has been known for over 100 years to cause chronic early season infections in honey bees. The only known causal agent of Nosema disease was Nosema apis until 1996, when another microsporidian species, Nosema ceranae was described from the Asian honey bee, Apis cerana, by Fries and colleagues. N. ceranae has since been found infecting populations of the European honey bee, Apis mellifera, around the globe. The origins of N. ceranae and the role these microsporidian pathogens may play in collapse of honey bee colonies is under study in laboratories worldwide. How they are transmitted and invade new colonies, and the effects on the honey bee hosts, especially when N. apis and N. ceranae interact with other diseases, parasites, pesticides and environmental stresses, is not yet well understood.

But, what exactly are the microsporidia? This group of pathogenic organisms first came to light in the 19th Century when they were associated with “pebrine disease” of silk worms. Louis Pasteur, credited with the first scientific studies on microsporidia during this period, wrote the 1870 classic paper Etude sur la maladie de vers a soie in which he described a method to control the disease. Although some early researchers noted similarities with pathogenic fungi, the lack of typical thread-like hyphae or mycelia and the unusual physical characteristics and germination “behavior” of microsporidia led to the assumption that they were an unusual group within the Protozoa. Information from the DNA sequences of several genes has, however, shown that the researchers in the early 20th Century were probably correct- Microsporidia are most closely related to organisms in the Kingdom (or Supergroup) Fungi, although where they fit in the fungal lineage is still debated.

Species in the genus Nosema are probably the best known of the microsporidia infecting insects because of the diseases they cause in honey bees, bumble bees, silk worms, European corn borers and other common pests and beneficial species. There are, however, over 1,300 described species of microsporidia in more than 160 genera, and approximately 700 of these species were identified from insects. Microsporidia also infect other animals and protozoons, but they do not infect plants. Although there may be some genetic relationships among microsporidia infecting different animal groups (including mammals and other vertebrates), each microsporidian species is usually only pathogenic to one host or a small number of related hosts. An example is N. ceranae, which infects A. mellifera and A. cerana, and while one record suggests that it can infect bumble bee species, there is no evidence that N. ceranae infects natural populations of species outside the family Apidae. Another bee pathogen, Nosema bombi, has been isolated from a large number of bumble bee species but has not been detected in other insects. 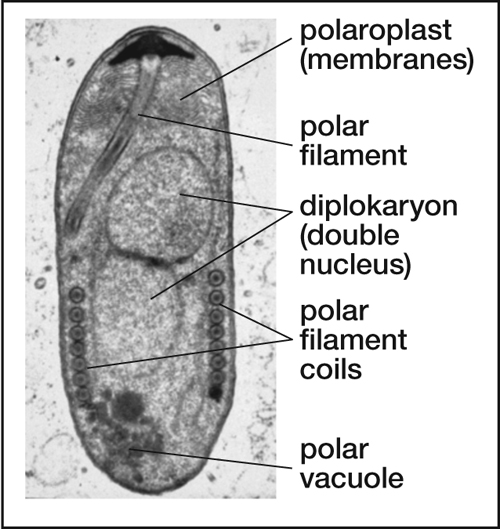 Figure 1. Major organelles inside an infective microsporidian spore. Photo courtesy of the Society for Invertebrate Pathology.

Microsporidia are single-cell organisms and are possibly the smallest organisms with a true nucleus (eukaryotes). Mature spores measure 0.00006-0.00040 inches (1.5 – 10 microns) in length, depending on the species. The honey bee microsporidia, N. apis and N. ceranae, are about 0.00015 inches (4 microns) in length; approximately 100 spores could fit end-to-end across the period at the end of this sentence. The most common general shape of the microsporidia that infect terrestrial insects is similar to that of a jelly bean, but different species vary from kidney and spindle shapes to egg or tear shapes, to long, slender cigar-like contours. Some species isolated from aquatic organisms sport ornaments on the spore coat that are suggested to be flotation devices.

Unlike many bacteria and fungal pathogens of insects that can germinate and reproduce in the environment, at least during certain life stages, microsporidia are obligate pathogens; they can only multiply inside the cells of the host. The only stage that can survive for some time in the external environment is the infective mature spore, which is essentially a dormant stage and must be ingested by a susceptible host and invade the tissue cells of the alimentary tract to reproduce once again. Most microsporidian species reproduce only in the cytoplasm of the host’s cells, but a few have been known to utilize the cell nucleus. Nuclear invasion, however, rarely occurs in infections caused by Nosema species.

Infective microsporidian spores contain simple but important (and interesting) structures. These organelles, which are only visible using transmission electron microscopy at a magnification of more than 5,000X, are nearly all related to invasion of host cells and reproduction. Figure 1 shows a longitudinal section of a mature spore containing a double nucleus (all true Nosema species have double nuclei called diplokarya; other groups may have a single nucleus), layers of membranes at the apical end of the spore called the polaroplast, a vacuole at the distal end of the spore and, most spectacularly, a polar filament that is attached at the apical end of the spore and winds like a spring around the inside spore wall. The mature spore is covered by an outer exospore formed of protein and an endospore that is composed of a protein-chitin matrix. This thick, tough spore wall protects the spore once it leaves the host cell and is exposed to environmental conditions. It is also refringent under light microscopy, causing the spores to shine in a characteristic fashion (Figure 2) and providing a diagnostic tool.

The mechanism used by microsporidia to invade the host cell is a very unusual type of “movement”, particularly because there is no other known form of movement or locomotion by these organisms. When a mature spore is eaten by a susceptible host, conditions inside the gut, such as pH and ion composition, initiate germination. The polar filament everts from the apical end of the spore by turning itself inside out at a speed that allows it to puncture the gut epithelial cells of the host (see “germinating spore”, Figure 3). The posterior vacuole appears to expand during germination, pushing the contents of the spore into the tube of the polar filament for injection into the host cell.

Figure 3 shows the life cycle of a Nosema microsporidium using high magnification transmission electron micrographs to illustrate the stages as they actually appear in cross section. Inside the host cell cytoplasm, the injected sporoplasm divides to form meronts. It is not known now many times the meronts divide before the pathogen “commits” to form spores, and this probably varies depending on the species. As shown in Fig. 3, most Nosema species initially develop in two stages in the host, primary reproduction, which serves to spread the pathogen to adjacent cells, and secondary reproduction, with mature infective spores being the final stage. Microsporidia of different species infect different tissues of their hosts. N. ceranae and N. apis are both pathogens of the midgut tissues but other species may parasitize the fat body (a major metabolic tissue of the insect), or may be systemic, infecting all tissues, including the ovaries and testes. When gonads are infected, a microsporidian infection can often be transmitted to the next host generation via the egg. Because N. apis and N. ceranae only infect the gut tissues, there is no inter-generation transmission of these species within the eggs.

Microsporidia lack fully formed mitochondria, the energy-producing organelles of most cells. So, what do they “eat” and how do they process nutrients in order to survive, grow and reproduce in the host cell? Based on genetic studies that indicate whether an organism has the necessary mechanisms to process nutrients, the most likely source of energy uptake from the host is direct- microsporidian vegetative forms (meronts and sporonts) appear to directly absorb adenosine triphosphate (ATP), the chemical that stores and transfers energy in cells. There is some evidence that sugars can be absorbed and processed, but most other pathways for producing cellular energy appear to be lacking. Microsporidia are thus some of the most specialized and host dependent of pathogens.

N. apis and N. ceranae infections are examples of the chronic nature of microsporidian disease. Some species of microsporidia are relatively virulent and all infected hosts die before they mature, but many microsporidia produce somewhat less severe effects in their hosts. Nevertheless, if a large percentage of hosts are infected, even chronic effects such as reduced mobility and egg-laying and a shorter adult lifespan can have a strong impact on the host populations. In addition, microsporidia can function synergistically when combined with other diseases and environmental stresses to lower the tipping point for a population “crash”. Whether this is happening in honey bees as a factor in colony collapse disorder remains to be shown but, obviously, any disease that has harmful effects is adding to the stress on colonies. The USDA CAP Project scientists are currently working on several aspects of the biology of N. apis and N. ceranae and their effects on honey bees, including the interactions of these microsporidia with viruses.

While obviously causing problems for management of beneficial insects, and causing disease in some mammals and immune deficient humans, microsporidia are also fascinating and unique organisms with a very specialized place in microbial ecology. These pathogens are known to be an integral part of the natural enemy complex of “outbreak” insect pests such as European corn borer, gypsy moth, spruce budworm, grasshoppers and tent caterpillars, and have been introduced as classical biological control agents of some pest species. Studies on solutions of disease problems in beneficial organisms and biological control of pest species will continue to increase our understanding of how these pathogens function in their hosts. 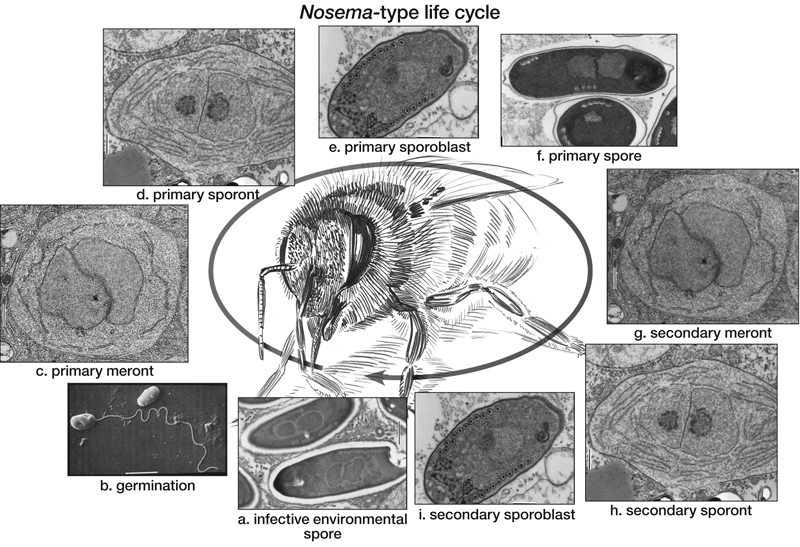 Figure 3. Typical life cycle of a microsporidium in the genus Nosema. Infective environmental spores (a) are eaten by a host, then germinate by extruding the polar filament and injecting the contents of the spore, the sporoplasm, into the host midgut cells (b). The primary meront (c) is the first vegetative stage and divides one or more times before spore formation begins. The sporont (d) is the first stage that is committed to form spores; it divides once to form two sporoblasts (e), which are immature spores. In this first cycle of reproduction, primary spores (f) are formed. These spores have thin walls and short polar filaments, and germinate inside the cells to infect adjacent cells. A second cycle of reproduction occurs when secondary meronts (g) develop from sporoplasms extruded from the primary spores and divide to form secondary sporonts (h). Each sporont produces two secondary sporoblasts (i), before maturing to form environmental spores (j). These spores exit the host, primarily in the feces, to infect other hosts. (Scanning electron micrograph of germinating spore courtesy the Society for Invertebrate Pathology; transmission electron micrographs of other stages courtesy Wiley Publishing Co.)