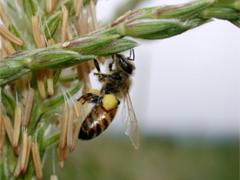 Field crops planting season is underway in the Midwest. Most of the annual crop acreage planted in North America this year will use neonicotinoid treated seed. Neonicotinoids are extremely toxic to honey bees, and recent research has suggested that honey bees that forage near these types of plantings may be at risk. The risk is greatest during the period while crops are being planted. Dr. Christian Krupke and Dr. Greg Hunt (Purdue Extension Entomology) will present an overview of the current research at Purdue and elsewhere and offer suggestions for both field crop growers and beekeepers that can minimize the chances of honey bee exposure to these chemicals in the field.

Download the webinar handout at this link, or view below.

News about this research.

Populations of honey bees and other pollinators have declined worldwide in recent years. A variety of stressors have been implicated as potential causes, including agricultural pesticides. Neonicotinoid insecticides, which are widely used and highly toxic to honey bees, have been found in previous analyses of honey bee pollen and comb material. However, the routes of exposure have remained largely undefined. We used LC/MS-MS to analyze samples of honey bees, pollen stored in the hive and several potential exposure routes associated with plantings of neonicotinoid treated maize. Our results demonstrate that bees are exposed to these compounds and several other agricultural pesticides in several ways throughout the foraging period. During spring, extremely high levels of clothianidin and thiamethoxam were found in planter exhaust material produced during the planting of treated maize seed. We also found neonicotinoids in the soil of each field we sampled, including unplanted fields. Plants visited by foraging bees (dandelions) growing near these fields were found to contain neonicotinoids as well. This indicates deposition of neonicotinoids on the flowers, uptake by the root system, or both. Dead bees collected near hive entrances during the spring sampling period were found to contain clothianidin as well, although whether exposure was oral (consuming pollen) or by contact (soil/planter dust) is unclear. We also detected the insecticide clothianidin in pollen collected by bees and stored in the hive. When maize plants in our field reached anthesis, maize pollen from treated seed was found to contain clothianidin and other pesticides; and honey bees in our study readily collected maize pollen. These findings clarify some of the mechanisms by which honey bees may be exposed to agricultural pesticides throughout the growing season. These results have implications for a wide range of large-scale annual cropping systems that utilize neonicotinoid seed treatments.