We feel that the advantages of marking the
queen outweigh the disadvantages. A queen marked
with bright colored paint is easier to find. You
know the marked queen is one you introduced, not
a supersedure of unknown quality. You also know
her age. Younger queens are more prolific layers and
produce more pheromone that maintains colony
cohesion, thus making the colony less prone to
swarming and less susceptible to stressful conditions.

How to Mark a Queen

• Practice with drones until you have confidence that
you can do it without damaging the drone. You do
not want to squeeze the abdomen or thorax and you
do not want to drop the queen.

• Be prepared: have enamel paint and a helper’s extra
pair of hands ready, if needed, to hold the frame,
unscrew cap from paint bottle, etc. If alone, shake
paint and unscrew cap. 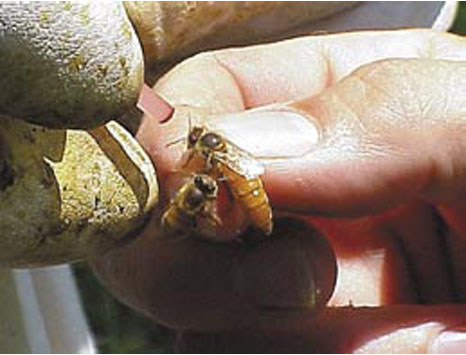 • Grasp queen by the wings between forefinger and
thumb of left hand so that her legs are suspended.

• Place the forefinger of the right hand (nail side down)
below her legs and she will quickly rest her legs on it.

• Move the thumb of right hand on top of and trapping
at least two legs (right side) with enough pressure to
hold her (see photo). If you have the legs secure she
will stop moving.

• If alone, daub the paint onto the center of the thorax
only and hold her gently for 30 seconds to one
minute before putting her back on the frame from
which she was taken. Insert the frame back into the
colony.

• If a helper is available to daub paint, add your left
thumb to trap additional legs of the queen (left side)
and have the helper daub the paint on the queen’s
thorax.

Why Requeen? Better Performance – Better Production
Most beekeepers requeen every year to take
advantage of the better egg-laying performance
and productivity of the young queen. A queen may
lay for several years, but 99 per cent of queens are
most prolific for the first year and decline during the
second year, with performance falling drastically
thereafter. A colony with an older queen is more likely
to swarm than one with a young queen. Colonies
with more prolific, young queens are less likely to be
overwhelmed by parasitic mites. An inferior queen
results in an inferior colony.
If you let the colony requeen itself, you may end
up with an inferior queen. Smaller, less vigorous
queens usually hatch out first and destroy larger
queens in their queen cells before they emerge.
A queen needs to mate with 12 or more drones
over a one- or two-day period to accumulate the 5
million sperm she will need throughout her life. If the
weather during her mating flights is cold or rainy, then
drones may be scarce, resulting in less mating. This
queen may run out of sperm later in the season and no
longer lay worker eggs.
A virgin queen may mate with drones of
inferior stock, resulting in a colony with poor honey
production, increased tendency to swarm or one that
exhibits excessive defensive behavior.
Consider requeening if the colony exhibits
one or more of the following: unexplained low bee
population, excessive propolis production, laying
workers, defensiveness, high swarming tendency, poor
honey production or excessive drone production.

A colony can be requeened at any time during the
warm season, but requeening is most successful when
a nectar flow is on. Routine requeening is usually done
in spring or late summer. We suggest requeening early
in August, but let’s examine why spring requeening is
also an option.

The advantages of spring requeening:

• The old queen is easier to find due to smaller bee
populations.

The disadvantages of spring requeening:

• Inclement spring weather in Tennessee may confine
bees, causing them to eat their stores and increase
chance of queen supersedure.

• Spring rains and cool temperatures may prohibit
opening the colony to install a new queen.

• If swarming has begun, you can miss capped queen
cells as well as virgin queens that may be present or
may be returning from mating.

• Queens from queen producers may be of inferior
quality due to poor weather conditions for mating in
queen production areas.

The advantages of August requeening:

• Colony starts the winter with young healthy bees and
a new queen.

• Colony less likely to swarm next spring with a young
queen.

• Spring population should be higher with a younger
queen laying more in late winter and early spring
than an old queen.

• Queens are less expensive to purchase than in spring.

• There is a break in the brood cycle, which can reduce
disease and pest problems.

• If this queen fails, then you still have time to try
again before cool fall weather.

The disadvantages of August requeening:

• If no honey flow is on, then bees will be more
defensive and prone to robbing.

• If no honey flow is on, then you need to feed all
colonies in the apiary where you are requeening.
If you feed only the requeened colonies, the strong
colonies nearby will rob them.

• May take more time if bees start robbing the colony
being requeened, because you must stop working
and come back later after robbing ceases.

Although many procedures have been described
about how to install a queen, they can be classified as
either direct or indirect.

With direct methods the queen is released directly
into the colony, usually in combination with smoke,
scented sugar syrup or honey. The new queen and
the colony to receive the queen are both treated with
smoke, scented sugar syrup or honey to mask any
difference in odor between her and the colony.
Indirect methods of queen introduction using
shipping cages are more preferred by most beekeepers.
Some beekeepers use push-in cages and others use a
division screen method. 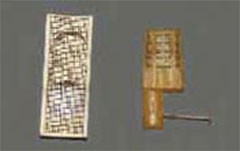 Many queen producers still ship their queens to
beekeepers in the wooden “Benton cage.” This cage
has three circular cavities covered by screen, openings
on either end that are plugged by corks. The cavity on
one end of the cage is filled with sugar candy (fondant,
a mixture of powdered sugar and water in a doughlike
consistency). The plastic “JZ BZ” queen cage is
preferred by some queen package producers.
The new laying queen is normally shipped with
six attendant bees inside the cage to take care of her.
When you receive the queens in the mail, inspect
them to make sure they are alive. Add a couple drops
of water to each cage on the screen, away from the
candy end, to let the bees get water. New research
suggests that the attendants should be removed before
introducing the queen because they interfere with
acceptance.
One way to safely remove attendants is to do it
in a closed room with a window. You can wrap the
cage except for the corked end without candy with
a cloth, then remove the cork, making this opening
the only place where light can enter. The workers and
sometimes the queen will be attracted to light and
come out. The quickest method is to turn off room
lights, remove the screen and let all bees y to the
“lighted” window. Then replace the screen and put
only the queen back inside.

Installing a Queen in a Shipping Cage:

• Locate the old queen and remove her from the
colony. If you have difficulty finding queens, place
queen excluders between supers with brood for four
days before requeening. This will confine the queen
to one box. While searching for the queen, search
also for eggs. The queen will be in the box where
you find eggs, because eggs laid before you added
excluders have hatched. 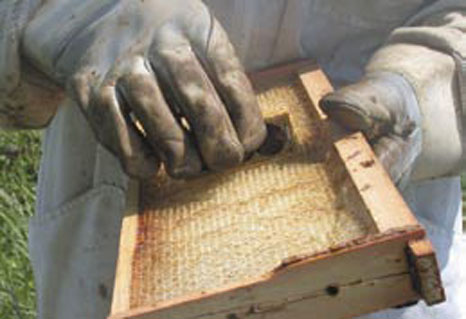 Installing a queen in a shipping cage.

• Remove the cork from the candy end of the cage.
One purpose of the candy is to delay immediate
release of the new queen. In the two days (usually)
that the workers take to eat the candy and release
the queen, her odors and that of her attendants have
blended in with that of the colony. A new queen and
her attendants have a different odor than that of the
new colony and they may be treated aggressively if
they are released too soon.

• Press the side of the cage with the candy end up
vertically into the middle of a frame of brood and
move the adjacent frame of brood to “sandwich” the
cage perpendicular, in between.

• Putting the candy end up keeps any attendant bees
(if included) from blocking the hole if they should
die. If the candy end were down, dead attendants
could block the queen’s exit.

• Wait three days before inspecting to determine if the
queen is released. If she is not out and much candy
remains or it is too hard, carefully poke a small hole
through the candy to speed the process.

• Wait 10 days to search for her, and more importantly,
for eggs, which indicate she is laying and has been
accepted into the colony. 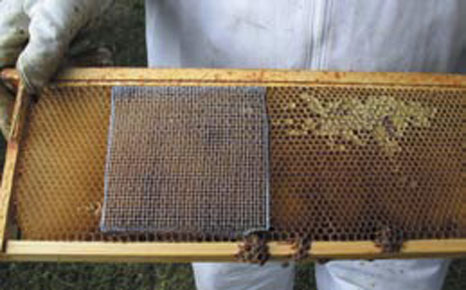 A press-in cage is a screen box with an open side
made of eight-mesh (1/8- inch squares) screen, 4 inches
by 4 inches, with each edge bent upward at a 90-degree
angle to form a side that is 1 inch wide. The open side
of the box is pressed over the queen on a capped brood
frame that is about to emerge. No adult bees should
be trapped under the cage with the queen. A few cells
of honey should also be under the cage. New workers
hatch out under the cage, take care of the queen and
clean cells where she lays eggs. The cage is removed
when eggs are found. During this several-day process,
the queen and workers acclimate to one another and
the queen is readily accepted. Caution: Make sure you
put the cage over comb without holes. Workers can
crawl through holes to get inside the cage before it’s
time to release the queen.