There are several methods to acquire bees,
including buying an existing colony, starting from
a small “nucleus” colony purchased from another
beekeeper, installing a package purchased from
a supplier, capturing a swarm and splitting an
existing colony. Let’s look closely at the latter three
possibilities.

Installing a Package of Honey Bees

Starting a honey bee colony with a package
purchased from a reputable producer is a good
way to insure the colony you have is healthy and of
a particular race or hybrid. A package should be
installed in the early spring to take advantage of the
nectar flow.
A package consists of a known amount (by
weight) of bees and a caged queen shipped in a screen
box containing a feeder can of sugar syrup. Packages
can be bought in 2-, 3- and 5-pound sizes. One pound
contains about 4000 bees. They should be ordered
long before you want to receive them, ideally in the
fall.

Receiving a Package
Inspect the package. If the majority of the workers
are dead or the queen is dead, contact your supplier
for instructions and possible replacement. If all is well,
place the bees in a cool, dark place until early evening. 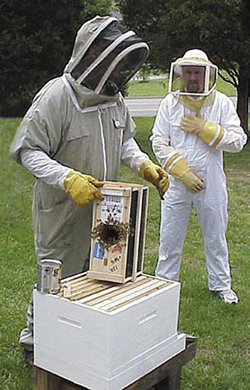 Installing apackage of bees into a single deep hive body. the feeder can is resting of the corner of the hive.

Installation
The cage should be installed into one single
deep or two medium hive bodies. You can use all
new foundation, drawn comb or a mixture. If using a
mixture, put the drawn comb in the center to facilitate
egg-laying there. Make sure the drawn comb was
taken from healthy colonies.
In the early evening, take the package to the
apiary. Spray more sugar solution onto the sides of the
package. Remove the outer and inner covers from the
hive. Remove four or five frames from one end of the
hive body or both bodies (medium body). Spray sugar
solution lightly onto the remaining frames and on the
inner walls of the hive body.
Remove the top cover and feeder can from the
package. Remove the queen cage from the package
and cover the opening of the package. Remove the
cork from the end of the queen cage plugged with
candy and use a nail to poke a hole in the candy,
being careful not to harm the queen. Suspend the
cage, candy end up, between the two center frames
of those remaining in the hive body. For medium
hive bodies, suspend the cage within the bottom hive
body. Remove the cover from the hole in the top of the
package, shake about a cupful of bees onto the queen
cage then place the package, with the hole end up, in
the open space within the hive.
Replace the inner cover and place a feeder can
with a 2:1 sugar solution and Fumidil-BTM(according
to label directions) over the opening in the inner cover.
(Be sure the queen cage is not directly below the inner
cover opening.) Place an empty super on the inner
cover around the feeder can and cover this with the
outer cover. Partially block the hive entrance with
a entrance reducer or grass and leave it blocked for
about a month.
Check the queen cage in three days to see if the
queen has been released. If she has not been released,
remove the screen and let her walk into the colony.
Then, do not disturb the colony for 10 days. At this
time, examine the frames for a brood pattern. If a
brood pattern and eggs are found, then you have
successfully installed the package. Remove the
package container and replace the frames removed
earlier. Close the colony.

Other Methods of Bee Installation
There are variations of the installation method
mentioned above, including differences in releasing
the queen and the workers. After suspending the
queen cage, gently shake the bees from the package
onto the bottom board. Lightly mist the bees with
sugar solution. Replace the frames, being careful not to crush any bees. Close the hive and proceed as
above.
Another method of queen introduction is to place
the queen cage on the bottom board, shake a cupful
of bees onto the cage, then shake the remaining bees
onto the bottom board.
Also, the queen may be released more
immediately by removing the cork-only plug end of
queen cage. But likelihood of queen acceptance is
reduced using this method of release.