The Place of Honey Bees in the World

The honey bee managed in North America is the western honey bee Apis mellifera L. The generic name Apis means “bee-like,” and students of Romance languages will note in the specific name mellifera echoes of the word “honey.” Thus the Latin translates loosely to bee-like-honey-loving-insect. The “L” stands for the 18th century taxonomist Carolus Linnaeus who named the western honey bee along with hundreds of other plant and animal species. The adjective “western” is necessary to distinguish our bee from its eastern cousin Apis cerana from Asia. The genus Apis is distinctive for its fascinating biology, ecologic preeminence, and pervasive importance to agriculture. Its natural range extends from Portugal to Japan, from the cape of South Africa to near the Arctic circle, and in that vast range are at least five member species. But we must limit our attention to just one.

Honey bee queens are usually catagorized by their race or some other description of their breeding. The VSH line, pictured here, is actually a mix of different races of bees found in Louisiana and Michigan with mite resistant traits. Photo courtesy of Glenn Apiaries.

For starters, that one species, Apis mellifera, is further subdivided into at least 20 recognized subspecies, races, or locally-derived biotypes ranging naturally from northern Europe, the Middle East, and all of Africa. None is native to North America but was introduced to that continent, most significantly during the centuries of European colonization. I will limit my discussion to those races of enduring historic or practical interest to North American beekeeping.

Called variably the German black bee or north European bee, this race is thought to be the first to make landfall in North America, most likely in the year 1622 on the coast of Virginia. It is this bee which Native Americans famously called “white man’s fly,” a newcomer to the neighborhood and signal that European settlers were not far behind. Encountering flora and temperatures similar to back home, the German black bee flourished along the east coast, so much so that by the end of the next century naturalists were debating whether in fact A. mellifera mellifera was alien to the continent. Practically speaking, the German black bee was the only honey bee in eastern North America until the mid-19th century when improved steam technology made possible rapid ship transit across the Atlantic. This development heralded a wave of diverse and unregulated honey bee imports to a degree never seen before or since. The German black bee, in spite of its suitability for northern latitudes, never really won the hearts of American beekeepers. It tended to sting a lot and was prone to serious diseases like American foulbrood. So beekeepers were on the lookout for “better” bees, some of which were successfully introduced and are described below. In speaking about the German black bee I tend to speak in past tense because it is doubtful whether A. mellifera mellifera exists anymore in North America. Although its genetic ghosts remain in the melting pot that has become North American A. mellifera, its supplanting, begun in the 19th century, was completed in the late 20th when exotic parasites wiped out what remained of German black bee populations, by then abandoned by beekeepers to the woods and hollow trees. 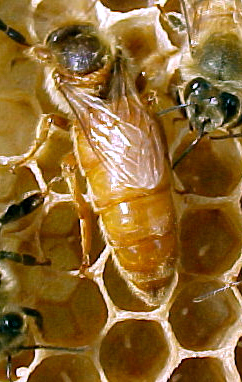 Cordovan queen: Cordovan bees are Italian (Apis mellifera ligusitica)bees that have been selected for the single recessive gene that determines the cordovan color. For decades, bee researchers have utilized this cordovan color variation in ingenious experiments to decipher the genetics, mating behavior and other aspects of the honeybee. – Photo and text from Glenn Apiaries

By far the most enduringly popular bee in America’s history is the Italian. Like cream rising to the top, its numerous assets became apparent during the Great Importations of the 19th century and before long it predominated over other imports and became the standard against which others are judged. This preeminence is justified. The Italian bee is relatively gentle, and it is not far-fetched to say that the Italian bee is the most productive honey bee on Earth with colony populations and honey yields regularly exceeding comparison groups. Its body color tends toward lighter golds and browns. I once had the opportunity to observe an apiary of imported Italian bees in the country of Azerbaijan near the Caucasus Mountains, native range of the Caucasian honey bee. It was not a scientific observation, as the sample size was one and I cannot exclude the possibility that this beekeeper was unusually skilled and progressive. But after days of observing apiaries of lackluster native bees I was astonished at this Italian apiary in which bees were foraging like crazy and colonies at least twice as populous as their neighbors.

I must hasten to add that Italian bees are not perfect from a beekeeping point of view. Their rapid spring buildup and productivity come at the cost of what is best described as reckless spending. This is seen in late winter/early spring when colonies begin expanding their populations, a growth fueled by honey and pollen stored from the previous season. Italians initiate early and expansive brood production at levels far in excess of the food stores they possess to support this activity. Unless the beekeeper intervenes, the outcome can be colony death from starvation. Another problem with Italians, most apparent since the parasite introductions of the 1980s, is a general susceptibility to pests and diseases.

This subspecies is native to the trans-Caucasus region between the Black and Caspian Seas and was imported to North America beginning around 1882. Its body color is grey/black. It is best known as a gentle bee, and for this reason was a favorite of beginners in the United States for a long time. I remember advertisements for this bee in the beekeeping magazines as late as the 1970s. But Caucasian bees have fallen out of favor, and there are few if any providers of this stock remaining in North America. For one thing they are not as productive as Italians, and they have a propensity to heavily coat the interiors of their hives with propolis – a natural glue derived from tree resins. North American beekeepers have an historic intolerance of propolis, but I have come to think this is a misguided prejudice. There is evidence to suggest that propolis possesses anti-microbial properties and aids bees in defense against nest invaders, traits increasingly important in this age of exotic pests and chemical-based pest control. There may come a day when Caucasians, or at least their propolis habits, are looked on favorably again. 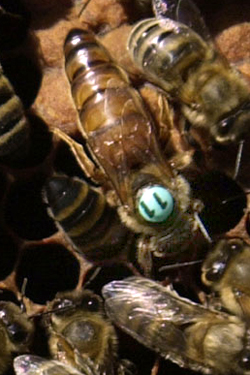 In contrast to the Caucasian, the Carniolan bee has enjoyed a rise in popularity in recent years. Apis mellifera carnica is native to east-central Europe. It is the darkest of the popular races, and for this reason one sometimes has trouble finding Carniolan queens while working a hive because they blend so completely into the background of black bees surrounding them. Carniolans are thought to express a measure of resistance to the parasitic varroa mite. But perhaps their most consistent feature is the conservative way in which they spend their food resources and expand their brood nest in spring. In this regard one might think of them as the antithesis to Italian bees.

In the 1990s the US Department of Agriculture began a cooperative project with researchers in eastern Russia to locate, test, and import honey bees from that area into the United States. The motivation behind this was the varroa mite crisis in the US and the search for bees that would have genetic resistance to this pest. The USDA researchers reasoned that genetic resistance was most likely to be found in that area of the world where the ranges of Apis mellifera and varroa mites had overlapped for the longest period of time, thus providing a chance for natural selection to confer resistance to the bees. In eastern Russia there was a long-established population of honey bees originally imported by rail from European Russia in the early 20th century. It is assumed the original bees were predominately Carniolan. Subsequent studies revealed that the east Russian bees are indeed resistant to varroa mites, and ultimately the bees were introduced into the United States where today they comprise a growing fraction of the commercial bee stocks. The bees display a measurable degree of varroa mite resistance while maintaining levels of productivity comparable to Italians. The Russian bees also exhibit the Carniolan feature of conservative spring buildup.

This is the so-called Africanized, or more sensationally, “killer” bee. During the centuries of European New World colonization, as in North America there were repeated introductions of European bees into the southern continent. However, European bees transported into tropical regions of South America did not flourish and by the mid 20th century beekeeping in Brazil and other South American countries was considered below world standards. The solution, it was believed, was to import honey bees from tropical Africa, and this objective was accomplished in the late 1950s. The new bees were indeed splendidly suited to the conditions they encountered in Brazil and soon began a rapid territorial expansion, eventually reaching the southern US by 1990. For most of their history in the US, Africanized bees restricted their range to the American Southwest; however this changed in 2005 when reproducing populations of Africanized bees were confirmed in Florida. The extent of their eventual range in North America is uncertain, but there is evidence that they are limited by temperate latitudes. 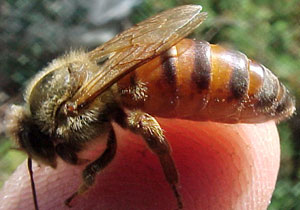 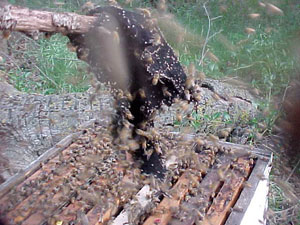 Africanized bees are more aggressive then Eurpoean bees, as seen in this photo where bees are stinging a piece of leather material being waved over an open Africanized colony. (Photo courtesy of Glenn Apiaries)

During their 50-year history in the New World the Africanized bees have established a reputation as extremely defensive insects. There have been thousands of mass stinging incidents with these bees, some lethal, involving humans and animals. In spite of this infamy, Apis mellifera scutellata has been an engine for improved profitability in Brazil’s beekeeping industry. Under good management these bees are productive, and beekeepers in Brazil, now two generations removed from the bees’ introduction, wouldn’t do without them.

Source:
The above text is from “First Lessons in Beekeeping” by Keith S. Delaplane, reproduced with permission by the publishers Dadant & Sons, Hamilton, Illinois, USA, Copyright, 2007. This book can be purchased in its entirety from Dadant & Sons

The above photos were provided by Glenn Apiaries, whom provide instrumentally inseminated breeder queens for stock improvement and research. Glenn Apiaries