This article will discuss two issues : the possibility that sunlight may be used to sterilize beekeeping equipment, and the danger of outdoor water for bees as a possible source of Nosema infection.  There is good news on both accounts.

When we think about Nosema disease, and ways to control it, is helpful to consider the life cycle of the disease.  The organism spends part of its time developing and reproducing inside the midgut of the bee.  Digestion of food happens in the midgut, so it is very important.  And the midgut is where the antibiotic fumagillin acts.  It prevents the growing, or “vegetative”, Nosema from developing into spores.  Mature spores leave the bee mainly in feces and can last for very long periods on comb and other beekeeping equipment.  Fumagillin has no effect on the spores.  Consequently, it’s important to work on methods for the elimination of the spores left inside our bee hives, often after a colony has died or has struggled with a heavy infection.

To eliminate spores we must find their points of vulnerability and also consider what can work for practical beekeeping.  The ideal control method for any disease is highly effective, safe for bees and people, simple, quick, sustainable and relatively inexpensive.  To date, no method hits all of these buttons but we can hit many of them.

And one note here.  This article is about Nosema ceranae, the recently discovered and very widespread species.  However it applies largely to Nosema apis also, the type we have known for over 100 years.  The biologies of these two Nosema species are similar in many ways.

Sunlight – can it help us clean our equipment?

We can begin with sunlight, a priceless resource we get every day.  Part of the energy in sunlight comes in the form of ultraviolet light, a potent sterilizing agent.  To get an understanding of the effects of sunlight on Nosema spores I worked with KSU student Emily Hogue.  She put a preparation of spores onto glass microscope slides so that they could be easily examined later.  She then put the slides out in the sun for periods up to two hours.  The next step was to add a stain that would penetrate the spore if the spore was damaged by the sunlight.  This stain glows a rose-red color when viewed under a fluorescent microscope. 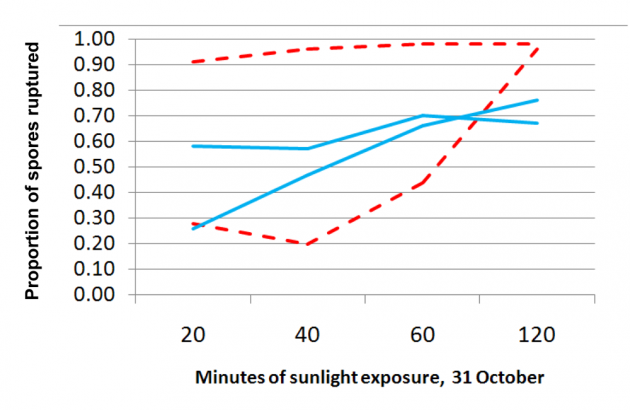 Figure 1:  Spores exposed to bee feces (red dashes) are more vulnerable to sunlight than the spores exposed to water (blue solid lines) for the same 2-hour time period.  Two other replications of this study, during October and November, showed this same effect.

Sunlight and some other agents make spores “leaky” by breaking their cell membranes.  Leaky spores cannot build up the pressure needed to push out their polar filaments, just as a punctured balloon cannot be inflated.  So a leaky spore is effectively dead.  The spores that take up the red stain are the leaky ones.

Sure enough, sunlight made for a lot of leaky, red spores.  But there’s more to the story.  Pure spores never exist in a hive or on stored equipment.   Normally spores are shed in the bees’ feces.  Occasionally a beekeeper may crush a few infected bees during a colony manipulation.  This too would release spores in feces and bee tissues.

So it seems that feces, however unpleasant, must be part of the Nosema picture.  I asked  Emily to add this to the study.  She made up some mixtures of spores with feces removed from the rectums of bees.  Small amounts of these mixtures were placed on microscope slides and exposed to sunlight along with the slides with pure spores.  I was quite confident that the fecal material would block some of the sunlight, and that this would complicate hopes for sunlight treatment of hive equipment.

In fact we saw the reverse.  Feces made the sunlight more effective at killing the spores.  One of our runs is described in Figure 1, when the slides were exposed to sunlight during mid-afternoon in late October of last year, when the sun is relatively low in the sky.  Most likely a stronger effect of sunlight would be seen in early summer when the sun is higher in the sky, and at latitudes closer to the equator, and at higher elevations.  Our campus is at an elevation of about 1000 ft.

What’s going on here?  My first thought was that some aspect of the chemistry of the feces was attacking the spores.  This idea has been supported by further studies.  While this apparent effect may not lead directly to a new method of control, it might show us something about conducting research.  In general, those of us who study Nosema spores begin our studies by collecting the spores from the midgut.  Perhaps we are missing something critical that happens in the rectum.

Water for bees – do we need to worry about spores? 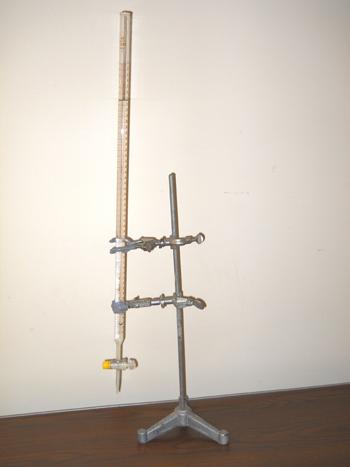 Figure 2 caption: Spores were placed in the water at top of the buret, and collected at later times from the spigot at the bottom.

All good beekeepers know that bees need water, especially during the hot, dry periods.  The water is collected by a specific group of forager bees that specialize in finding and collecting water.  This water is taken to the hive and placed drop by drop in cells, where it helps bees to cool their hive.  Bees fan their wings to circulate air through the hive, and the hive is cooled as the water evaporates.  In summer we must be sure that a water source is nearby, and provide it for our hives if it does not exist naturally.

We know also that bees defecate as they fly out of their hive, and that Nosema spores will be shed by infected bees.  So it seems logical that we should not place a water source directly in front of the hive.

I agree that an artificial water source should be placed a considerable distance from the hives, but the danger of Nosema transmission at the water source is relatively low.  This is because the spores are quite a bit denser than water, and quickly sink to the bottom.

To get an idea of how quickly the spores settle in water, I filled a glass buret with water, and added spores at the top.  A buret is a vertical tube with a spigot at the bottom (Figure 2).  The spigot allows one to carefully release a particular volume of the liquid in the buret.  The buret I used held 23 inches of water, from top to bottom.  At specific periods after I’d added the spores to the top, I released a milliliter of water from the bottom of the buret.

I found that most of the spores settled down quickly through the 23 inches of water.  During the first hour, 21 million of the spores were collected.  During the following two hours about a tenth as many (2.2 million spores) had settled to the bottom.  Very few spores remained at the top of the buret.  This goes along with the general lab observation that spores settle quickly in water and most water-based mixtures. We often use centrifuges to concentrate our spore preparations.

Consequently we can assume that virtually all of the spores dropped from bees flying over a water source will settle quickly to the bottom where they cannot be consumed by bees.  Any spores that fall at the edge of the water where the bees might perch will be quickly killed by sunlight if the water source is in the sun.  This is a reason for us to locate artificial water sources where they will receive as much direct sunlight as possible.

The next step will be to see whether spores on contaminated equipment can be killed by sunlight.  Of course this will be for those beekeepers with small numbers of hives, and room to spread the equipment out where they will receive enough sun.  The equipment will have to be rotated so that all surfaces receive the sun.  So there is some time involved here.  But on the other hand, sunlight leaves no chemical residues.  Spores will not develop resistance to this treatment.  And it’s free.