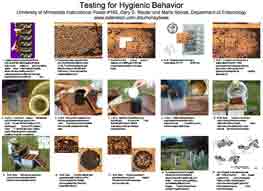 It is relatively easy to determine if a colony of bees displays hygienic behavior by testing them using one of the methods described below. 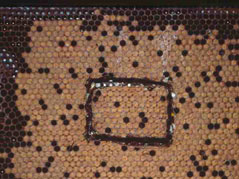 Photo B. A comb section of sealed brood containing approximately 100 cells on each side was cut out of the comb, frozen for at least 24 hours, and replaced in the hole left in the comb.

1. The freeze killed brood assay:
In this assay, a comb section of sealed brood containing approximately 100 cells on each side (2 x 2.5 inches) is cut from a frame and frozen for 24 hours at -100 F. The frozen comb section is inserted into a frame of sealed brood in the colony being tested (Photo B). Tests have shown that it does not matter if the frozen section comes from the same colony from which it was removed or from a different colony. The frame with the freeze-killed brood insert is placed in the center of the brood nest. Two days (48 hours) later the frame is removed and the number of sealed cells remaining is recorded. A hygienic colony will have uncapped and removed over 95% of the frozen brood within 48 hours. A non-hygienic colony will take over six days to completely remove the frozen brood. The speed with which a colony removed dead brood is correlated with its ability to remove diseased and parasitized brood.

2. Liquid nitrogen:
Freezing the brood with liquid nitrogen is more efficient and less destructive to the combs than cutting, freezing and replacing comb inserts. Liquid N2 is relatively inexpensive and easy to obtain; check with your local gas and welding suppliers, veterinary practice, or livestock artificial inseminating firm. There are no laws in any state restricting the use of industrial grade liquid N2 by individuals. It must be kept in an appropriate tank (e.g., a Dewar tank, which can be purchased through gas and welding supply houses), and the tank should be securely fastened to the truck during travel to avoid spillage. 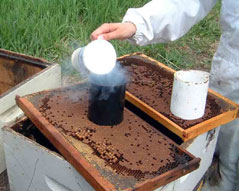 Photo C. A 3″ PVC tube is twisted into the comb down to the midrib. The liquid N2 is slowly poured into the tube.

Common sense and several precautions must be used when handling liquid nitrogen. It has a boiling temperature of -320°F, which means that it is extremely cold and will kill skin (causing severe frostbite) on contact. We recommend that users read the Material Safety Data Sheet on liquid N2 from the supplier.

You will need to construct (or find) a hollow cylinder into which you will pour the liquid N2 to freeze a circular section of sealed brood. We have been using a 3-inch diameter PVC pipe. The cylinder must be at least 4 inches long because the nitrogen will boil on contact with the brood.

A minimum of 10 oz of liquid N2 is needed to freeze-kill all the brood (approximately 160 cells) within a 3-inch diameter cylinder. A smaller amount will not kill all of the brood, leading to erroneous results. Use a 10-oz or larger polystyrene foam coffee cup for measuring and pouring. Other materials will shatter on contact with the liquid N2.

Select a frame with at least a 3-inch diameter circle of sealed brood containing fewer than 30 unsealed cells within the circle. Lay the frame horizontally across a support (i.e. an empty super). Twist the cylinder into the sealed brood until it reaches the midrib. Record the number of unsealed cells inside the cylinder. Pour 1.5 to 2 oz. of the liquid N2 into the cylinder and wait for it to freeze the edges or evaporate. Then pour the remainder of the liquid N2 into the cylinder. Wait to remove the cylinder until it thaws, which may take three to five minutes (Photo C). If you have additional cylinders, you can start the next test while you are waiting for previous ones to thaw. We put a drawing pin (thumbtack) in the top of the frame to mark the frame and the location of the test on the frame. Some hygienic colonies clean and repair the comb so quickly that it is hard to locate the test when you return. Place the frame in the center of the brood nest (Photo D). 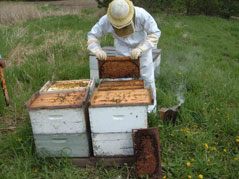 Remove the frame containing the frozen brood 48 hours later, and record the number of sealed cells remaining within the circle. When testing a colony that has been re-queened, six to eight weeks must elapse after requeening for the bees in the colony to be daughters of the new queen.

Important note: Both of these tests should be repeated on the same colony, and it will be noticed that the results between tests may vary. For example, a colony may remove 95% of the frozen brood on the first test, but only 50% on the second. This colony is not hygienic! It is very important that colonies be considered hygienic only if they remove >95% of the brood on two consecutive tests. The speed with which a colony removed dead brood is correlated with its ability to remove diseased and parasitized brood.

Answers from our experts:

To test the hygienic behavior of honey bee colonies, could I use dry ice (CO2) to fill the tube instead of liquid nitrogen? Answer – FAQ #41785

Source:
The above text and photos comes from Marla Spivak and Gary Reuter; Department of Entomology, University of Minnesota; SARE Fact Sheet # 03AGI2005; A Sustainable Approach to Controlling Honey Bee Diseases and Varroa Mites or for a printable version, Download a .pdf here.