The very word “beekeeping” implies the existence of a bee that can be “kept.” And the wonder of this fact should not be lost on the writers and readers of beekeeping books. Among the 20,000 or so bee species on Earth, only a handful tolerate some degree of human management. Standing above them all, Apis mellifera not only tolerates human management but thrives under it, achieving colony populations and productivity far in excess of other species. It is the dual assets of manageability and productivity that have secured for Apis mellifera its special place in human hearts and imagination, history and economy. 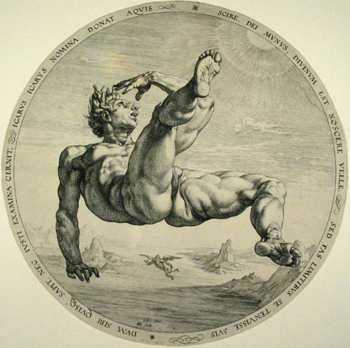 Icarus: an engraving by Hendrick Goltzius depicts Icarus’ reckless flight toward the sun, and his fatal fall when the heat loosed the beeswax that held his feathers.

Before Alexander the Great introduced cane sugar to the western world, honey constituted the chief sweetener for human societies within the native range of Apis mellifera. As such, bees were a symbol of industry and riches, and the world literature, mythologies and religious texts are full of references to bees and their products. Who can forget Icarus, his man-made wings, his reckless flight toward the sun, and his fatal fall when the heat loosed the beeswax that held his feathers? Who can forget Samson and his riddle: “Out of the eater, something to eat/Out of the strong, something sweet” and the answer: “What is sweeter than honey?/What is stronger than a lion?”
Beekeeping was practiced on a commercial scale in the ancient empires of Egypt and Rome and persisted as a cottage industry through the middle ages and Renaissance until the era of European expansion when the bees and the craft were exported all over the world. During that time bees inspired artists and poets. Who is immune to the spell cast by Irish poet Yeats in The Lake Isle of Inisfree:

I will arise and go now, and go to Inisfree,
And a small cabin build there, of clay and wattles made;
Nine bean rows will I have there, a hive for the honey bee,
And live alone in the bee-loud glade.

And who cannot delight over Dickinson’s:

The pedigree of honey
Does not concern the bee;
A clover, any time, to him
Is aristocracy.

We cannot tarry over the poetry inspired by honey bees, except perhaps long enough to excuse Dickinson for her 19th century confusion over worker bee gender. But before moving on we must note that entire books are devoted to the historical and literary gold mine afforded by bees, and readers are encouraged to consult such works as Hilda Ransome’s The Sacred Bee and Eva Crane’s The Archaeology of Beekeeping. 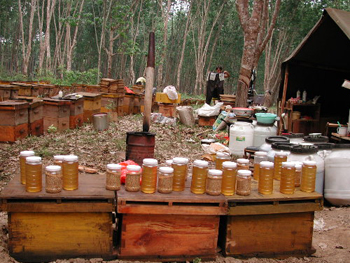 Roadside honey sale, and a few jars of pollen. This is in a apiary next to the rubber tree forest; Xishuangbanna, Yunnan, China. March 28, 2002. Photo courtesy of Zachary Huang.

Today, the western honey bee occurs on all continents except Antarctica. Its management is practiced by beekeepers at all levels, from garden hobbyists to commercial operators with tens of thousands of colonies. Honey retains its prestige as the most sublime of sweeteners, and like wine expresses a range of locally-derived characters distinctive enough to entertain the most sophisticated of palates. Beekeeping can be practiced anywhere gardening can be practiced, flowering plants occur, and a measure of isolation made possible from livestock, pets and human traffic – in isolated urban lots, margins between meadow and forest, margins of suburban lots, fence rows, and farms. A newcomer to beekeeping will be welcomed not only into the fascinating world of the honey bee, but into the fraternity of beekeepers that exists at national, state, and local levels. Numerous supply companies sell large volumes of standardized bee equipment, readily available by mail-order on the internet or from local dealers. Books and videos on beginning beekeeping are available in catalogs and from vendors at beekeeping conventions. A few state agricultural universities have programs in honey bee research, teaching and continuing education. County extension agents and local bee clubs are sources of invaluable personal guidance. In short, a new beekeeper doesn’t have to go it alone.

Besides honey, a bee hive produces a cornucopia of other products and benefits. Besides Icarus’s wings, beeswax can be used to make candles, cosmetics, ornaments, soaps, and furniture polishes. Large quantities of beeswax are recycled into the beekeeping industry as foundation – the embossed sheets of wax used to help bees build their combs. Bee-collected pollen is in demand at health food stores as a human food supplement, as is royal jelly, the glandular product used to feed female larvae and trigger their conversion into queens. Long valued almost everywhere except North America, propolis has a reputation as a bacteriostatic wound dressing and active ingredient for cold remedies. 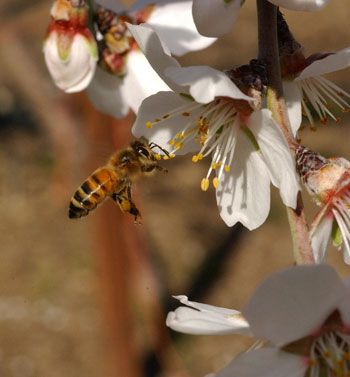 In spite of the fame and mystique of bee hive products, their contribution to human economies pales in comparison to the pervasive benefit of honey bee pollination – the transfer of pollen from the male parts of a flower to the female parts of the same or different flower. Bees do this automatically as they fly from flower to flower collecting pollen and nectar for their food. For many seed- and fruit-bearing plants this process enhances the quantity and quality of seeds and fruits. As the importance of this process became clear, in recent decades pollination has become a deliberate agricultural input, and hundreds of thousands of bee hives are rented annually in the US to ensure pollination of crops as diverse as almond, apple, blueberry, cantaloupe, cherry, clover, cranberry, cucumber, onion, pear, squash, and watermelon. For the intermediate- to large-size beekeeper, pollination has emerged as a significant source of revenue. For one thing, the agricultural ecology has changed in recent years to increase demand for pollination. The arrival of exotic honey bee parasites in the 1980s, most notably the varroa mite, caused a serious decline in wild honey bee colonies. This meant that there were fewer wild honey bees providing free background pollination. With fewer wild pollinators and an associated decrease in fruit yields, there was increased demand for supplemental pollination in the form of managed bee hives. It is true that bees of all sorts, including native bumble bees and solitary bees, are effective and important pollinators. But for the most part they cannot be managed as effectively as honey bees, so the preeminence of Apis mellifera as a commercial pollinator seems assured for the near future. At last count, their annual contribution to US food production was over $14 billion.

But let’s face it. Most people get into beekeeping without the least interest in pollinating crops, making money, or helping the environment. They get into beekeeping because there’s something fascinating about insects living together in a complex society inside a man-made box that I can keep in my backyard and open any time I want to. If they make me honey and pollinate my garden, so much the better. It is this contingent, the backyard hobbyist, that constitutes the largest fraction of beekeepers in the United States. It is this contingent, unfettered by large financial commitments, that turns to honey bees in their leisure hours, on the weekends, by choice and not necessity. It is this contingent that most accurately describes readers of this book. And if my experience is representative, it is this contingent that finds beekeeping an enriching divergence from their normal work week – a chance to dabble in wood-working, biology, agriculture, animal husbandry, food production, botany, marketing and business. The fact that many pass from backyard hobbyist to sideline or commercial levels is simply testimony to the economic legitimacy of beekeeping.

By now it has become apparent to the reader that honey bees are a portal upon the natural world as well as human world, past and present. Their grip on the imagination is well-earned. Just as they were for the ancient lore-masters, they remain today poignant symbols of industry and riches. If we are more inclined in the 21st century to measure riches in terms of knowledge, understanding, personal fulfillment, and leisure, so be it. That’s just further testimony to the timeless relevance of beekeeping. By reading this book and thinking about becoming a beekeeper, you are taking the first steps toward joining this ancient and noble stream of human enterprise.

Source:
The above text is from “First Lessons in Beekeeping” by Keith S. Delaplane, reproduced with permission by the publishers Dadant & Sons, Hamilton, Illinois, USA, Copyright, 2007. This book can be purchased in its entirety from [Dadant & Sons]

The roadside honey sale photo is by Zachary Huang [1].

The honey bee on an almond blossom if by Kathy Keatley Garvey, UC Davis Department of Entomology [2]