When humans get sick, they go see a doctor. More often than not the doctor prescribes a pharmaceutical to treat the illness. When a dog gets sick, his owner takes him to a veterinarian. Just as medical doctors do, the vet often prescribes a veterinary drug to treat the problem. When honey bees are sick the beekeeper diagnoses the problem, and just like doctors and veterinarians, they might apply a chemical treatment. The honey bee pharmacy may look different from the local drugstore, but the intended outcome is the same: restored health from the judicious application of a remedial chemical.

Honey bees suffer from diseases that have no corollary in human medicine and therefore require drugs quite different from those given to sick people. Varroa mites, in particular, are responsible for widespread bee death because they suck blood, reducing bee vigor, and transmitting or activating viruses. While it may seem strange to consider as drugs treatments like Checkmite+ and Apistan, beekeepers use them like drugs to maintain bee health by reducing varroa mite infestations. Apistan was the first anti-varroa drug to be marketed in the US in 1990. Treatment consists of two plastic strips impregnated with the pyrethroid pesticide tau-fluvalinate which are hung between brood frames for six to eight weeks. As bees rub up against the strips they pick up small doses of tau-fluvalinate which is largely non-toxic to bees but murder on mites.

It’s obvious that this kind of use treads a fine line between killing mites and killing bees. In the case of tau-fluvalinate, its success as a varroacide is somewhat surprising since the class of pesticides to which it belongs, the pyrethroids, contains many pesticides that are exceedingly toxic to bees. One of them, cyfluthrin (Baythroid) has an LD50 – the dose at which 50% of the bees in a group will die – of just 62 nanograms (the smaller the LD50 the more toxic). Yet tau-fluvalinate, just a few chemical tweeks different from cyfluthrin, has a generous LD50 of 9450 nanograms making it 150 times safer to bees. The utility of tau-fluvalinate as a miticide depends on the robust tolerance bees have for this pesticide.

As it turns out, bees tolerate the large quantities of tau-fluvalinate present in Apistan because they are very good at detoxifiying it (Johnson et al., 2006). The main workhorses for doing this are the so-called cytochrome P450 monooxygenases (P450s), a class of enzymes important for degrading all sorts of toxins in humans and all mammals. You can appreciate their importance when P450s are experimentally blocked; when honey bees receive a P450 blocker their susceptibility to tau-fluvalinate increases almost 1000 fold.

Unfortnuately, the effectiveness of tau-fluvalinate began to wane in the late 1990s as varroa mites evolved resistance (Elzen et al. 1998), though the mite’s resistance appears to occur through means other than detoxification. As tau-fluvalinate was beginning to fail in 1998, Checkmite+ was added to the beekeeper’s anti-varroa arsenal. Similar to Apistan, Checkmite+ consists of two plastic strips which are hung in the brood chamber, but these strips contain the pesticide coumaphos which belongs to entirely different class of pesticides: the organophosphates.

Organophosphates, like pyrethroids, are generally very toxic to honey bees. For example, methyl parathion (PennCap-M) has an LD50 of 111 nanograms per bee. Yet bees can tolerate the presence of Checkmite+ strips in the hive, each of which contains over a gram of coumaphos. The toxicity of coumaphos is 180 times less than methyl parathion, with an LD50 of 20,300 nanograms per bee. It isn’t clear why coumaphos is so benign when other organophophates are so deadly, but, again, detoxification through P450s seems to play a role. Coumaphos becomes four times more toxic to bees when a P450 blocker is used.

Bees’ tolerance of both coumaphos and tau-fluvalinate depends, at least to some extent, on rapid detoxification by P450s. If both pesticides are present in the hive at the same time there may be a problem if these chemicals compete with each other for detoxification through P450s.

Students in pharmacy and medical schools spend a lot of time learning about the potentially deadly consequences of mixing drugs. There are many examples of drugs that are safe by themselves but deadly when used in combination with another. Over 15,000 scientific journal articles have been published on the subject since the year 2000. The large number of drugs on the market today and the potentially fatal consequences of mixed uses have propelled drug interaction into the research limelight.

Many human drugs are detoxified by human P450s in the same way that coumaphos and tau-fluvalinate are detoxified by bee P450s. One common human drug that interacts with P450s is the over-the-counter drug acetaminophen (Tylenol). Taken alone, acetaminophen is extremely safe and has been used for over 50 years to alleviate headaches and other pains. Read the label on a bottle of Tylenol, however, and you will see this dire warning: “If you consume 3 or more alcoholic drinks per day [ . . .] acetaminophen may cause liver damage.” The problem is that alcohol, a recreational drug, interacts with P450s too. While neither of these drugs would cause great harm alone, the result of the two interacting with P450s can cause damage to the liver and possibly death.

Similar things may be happening in honeybees and given the recent reports of honey bee deaths associated with Colony Collapse Disorder we were concerned about the potential for bees to die from the combinations of drugs present in the hive. Of particular concern are coumaphos and tau-fluvalinate, both widely used as varroa mite treatments, and both reactive to P450s.

To test for interactions between tau-fluvalinate and coumaphos we collected newly emerged adults bees off of a frame of brood stored in an incubator. These new bees were allowed to mature for three days in the incubator with only bee candy for sustenance. The bees were then knocked out with carbon dioxide and given a range of low non-lethal doses of either coumaphos or tau-fluvalinate. The bees recovered within an hour, then were knocked out and treated again with a range of doses of the other anti-varroa treatment. Bees were returned to the incubator for 24 hours, then classified as either alive or dead and statistics were used to calculate an LD50 value. 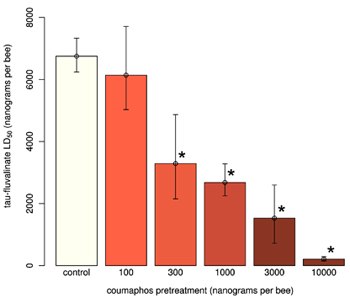 But how realistic are the dosages we used in this lab experiment? How likely is it that a bee will contact enough of either compound from Checkmite+ or Apistan strips to cause death? While real insight into this problem would require chemical analysis of the bees, it is possible to get an idea of the bees’ exposure with a few calculations. Each Checkmite+ strip contains about 1.4 grams of coumaphos. Assuming that 10% of the coumaphos present in the strip escapes from two strips in a hive of 20,000 bees over six weeks, that works out to a daily dose of 330 nanograms of coumaphos per bee – enough to double the toxicity of tau-fluvalinate. If similar assumptions are made about a pair of Apistan strips (each containing 0.7 grams of tau-fluvalinate) in a similar hive for 8 weeks, each bee would receive a daily dose of 125 nanograms – a dose insufficient to change the toxicity of coumaphos. However it is likely that nurse bees, which spend their time in the brood nest working next to these miticide strips, receive a larger dose of coumaphos or fluvalinate than the forager bees. 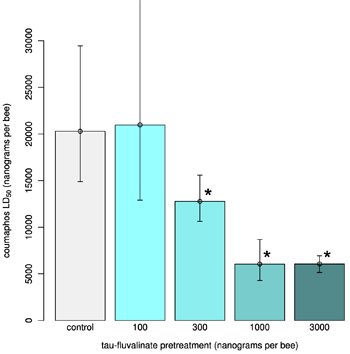 So it seems possible that treatment with both Checkmite+ and Apistan would cause some bees to die. We have not tried simultaneous treatment with both miticides since it seems like a foolish and unrealistic thing for any beekeeper to do. However, even in the absence of miticide strips, most bees in the US are being exposed to low doses of both chemicals right now. Many pesticides, including coumaphos and tau-fluvalinate, are extremely wax soluble, meaning that these compounds move into the wax component of the hive where they can reside for many years and potentially build up with repeated Apistan or Checkmite+ applications. Both compounds can survive the wax recycling process and can be readily found in the wax of new foundation (Martel et al. 2007).

It should come as no surprise that chemical analysis of brood wax samples collected from CCD and healthy colonies were always found to contain both coumaphos and tau-fluvalinate (Frazier et al., 2008). Both miticides are ubiquitous in modern beekeeping. The unanswered question is whether sufficient quantities of these chemicals can escape from the wax and enter the living bees where they may cause unwanted interactions with each other or with newly applied miticides.

This work was performed at the University of Illinois at Urbana-Champaign as part of my dissertation work with May Berenbaum. After graduation, I joined Marion Ellis at the University of Nebraska at Lincoln to continue looking at drug interactions in honey bees as a part of the multi-university USDA CAP Colony Collapse Disorder project. Bees are treated with many drugs beyond coumaphos and tau-fluvalinate and we are looking at the potential for drug interactions between the many drug treatments beekeepers use to maintain bee health. Work so far has only examined interactions between the miticides that result in bee death, but it is likely there are more subtle non-lethal effects in bees exposed to lower doses of miticides – effects that might be especially important in queen and drone health. We are looking forward to sharing our findings with beekeepers so that we can all become better bee pharmacists.