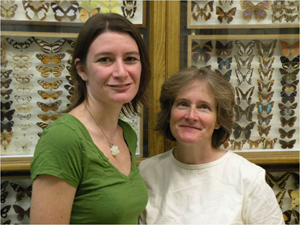 by ANNA MORKESKI and ANNE L. AVERILL University of Massachusetts/Amherst

For pollination services in the majority of fruit and vegetable industries, honey bees (Apis mellifera L.) remain the most economically valuable. However, many other species of native and a few species of managed bees are important contributors to pollination (Berenbaum et al. 2007, Winfree et al. 2007, James and Pitts-Singer 2008). In fact, for some crops, honey bees are less effective pollinators when compared to other bee species (Klein et al. 2007, Dafni et al. 2010) such as some solitary bees (e.g. Andrenidae, Halictidae, Megachilidae) or the social bumble bee (Bombus). However, only a few species of non-Apis pollinators have been successfully cultured and are available commercially. Bumble bees are playing an increasingly large role as managed pollinators, with many thousands of reared colonies used for pollination around the world, particularly for tomatoes and bell pepper in greenhouse facilities. In North America, Bombus impatiens Cresson is now the only commercially significant species and alfalfa leafcutting bees, red mason bees, and blue orchard bees are also cultured (James and Pitts-Singer 2008).

Owing to their critical pollination services, we are working on several studies under the small ‘non-Apis’ project that lies within the Managed Pollinator CAP. Our main objectives are to survey pathogens in native and commercial populations and to study both lethal and non-lethal effects of insecticides, particularly the new chemistries. In this month’s Managed Pollinator CAP column, we will present background and results of our pathogen studies, which are done in collaboration with Dr. John P. Burand, who is also at the University of Massachusetts.

Honey bees are not the only pollinators at risk. Native bee species have declined in diversity over the years and this is causing heightened global concern, especially owing to the possible impact on natural ecosystems (Potts et al. 2010). However, owing to the scarcity of long-term population data, the strength of evidence for decline varies among taxa (Berenbaum et al. 2007). Decline is best established in the bumble bees; a decrease in both abundance and range for some species has been seen in Europe, North America, and Asia (Williams and Osborne 2009). In the US, toward the end of the 1990s, several closely-related species in the same subgenus [Bombus franklini (Frison), Bombus affinis Cresson, Bombus terricola Kirby, and Bombis occidentalis Greene] underwent extensive or total population collapse (Thorp and Shepherd 2005, Colla and Packer 2008, Williams and Osborne 2009).

Potential causes of decline in Bombus have been suggested, including climate change, pesticides, land-use changes, agricultural policies, competition, disturbances to reproductive habits, and pathogen introduction. However, stresses may vary among species, and to complicate matters further, Williams and Osborne (2009) conclude that “…of course the factors that threaten a species may be multiple, correlated, interacting, and may differ among areas making the precise contributions or of causes difficult to establish.” Fortunately, many studies are moving ahead to evaluate potential ‘drivers’ of decline (Potts et al. 2010) and some degree of baseline understanding may be established in the near future. For example, a recent comparative analysis of characteristics of Bombus populations in Britain, Canada and China suggest that those at greatest risk for decline have narrow climatic ranges and may exist closest to the edges of their climatic ranges (Williams and Osborne 2009).

In North America, the most widely accepted, but unproven, cause of decline in the small group of closely related Bombus (discussed above) is the introduction of a novel strain of pathogen from Europe (Thorp and Shepherd 2005). The theory advanced is this: while North American species of bumble bee were being domesticated alongside European species in facilities overseas, they became infected with a strain of Nosema bombi endemic to the Old World, which was then brought back to rearing facilities in the United States and/or Canada. This pathogen is a unicellular microsporidian that reproduces in the Malphighian tubules, or kidneys, and forms resistant spores that are expelled in feces. Infection may result in abdominal distention and paralysis. The theory maintains that this introduced European strain had been serially passed on to successive generations of bumble bees reared commercially in North America, and then moved into wild populations when the purchased bees were placed in fields and greenhouses for pollination (Colla et al. 2006, Otterstater and Thompson 2008). Furthermore, this theory holds that the less closely related B. impatiens is more resistant to the disease caused by Nosema bombi than the closely related B. affinis, B. franklini, B. occidentalis, and B. terricola. 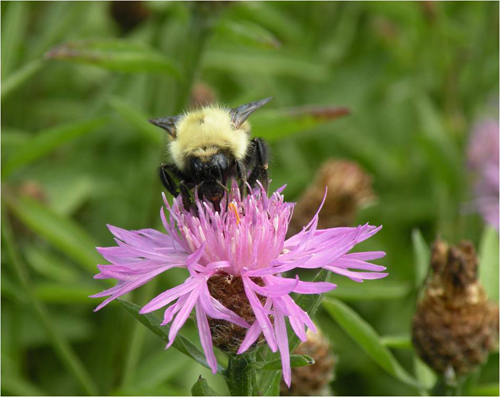 Bumble bee foraging in weed patch near bog in Sandwich, MA (photo by A. Averill)

What do we know about Bombus parasites/ pathogens in North America?

Compared to other geographic regions, much more is known about Nosema bombi infection in European species of bumble bees, where it has been characterized in eight species. To date, analysis of the genetic variance of Nosema bombi has been based on ribosomal genes, which typically contain very little variation within a species (Tay et al. 2005, Klee et al. 2006, Shafer et al. 2009). These genes don’t mutate rapidly enough to accumulate enough differences in the nucleotide sequences of DNA for the parasite’s recent transmission patterns or current population structure to be discerned. Efforts to identify other N. bombi genes to characterize for variation have been unsuccessful thus far, but the entire genome of Nosema ceranae was recently sequenced (Cornman et al. 2009). N. ceranae and N. bombi are closely related, so N. ceranae genes identified in that project may allow regions of N. bombi to be targeted and sequenced as well. Using this technique, variable regions in the N. bombi genome can be compared so the population structure and transmission patterns of this microsporidian parasite can be determined—and perhaps confirm/eliminate the theory of a ‘rogue’ Nosema strain responsible for precipitous decline of some bumble bee species. 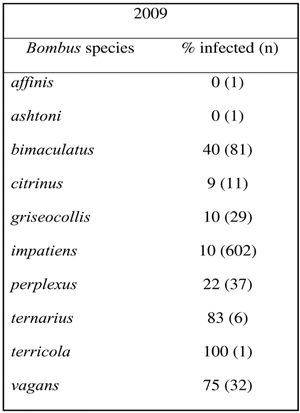 Table 1. Number and species of Bombus collected during 2009 and percent infected with Crithidia bombi, a flagellate parasite of the gut.

In addition to Nosema, bumble bees are hosts to whole communities of parasites and pathogens. The tracheal mite Locustacarus buchneri (Stammer) can reach high levels, but in southwest Canada, was found to have a relatively narrow host range (Otterstatter and Whidden 2004). Larvae of parasitic conopid flies develop in the adult, and Crithidia bombi is a common flagellate parasite of the gut that (at least in European Bombus) has a wide host range. In a survey of Crithidia bombi infections of eastern North American Bombus, we observed high variation in infection prevalence, by site and species. Of the 602 B. impatiens we collected in 2009, only 10% were found to be infected with C. bombi (Table 1). Infection prevalence also varied greatly by site, and each site varied in its composition of bumble bee species (Table 2).

Other undescribed parasite species, especially those that are single-celled and difficult to distinguish morphologically, will likely emerge using molecular techniques. A new species of Crithidia has just been proposed (Schmid-Hempel and Tognazzo 2010). Once described, a key piece of information that is needed is whether each of our bumble bee species is equally at risk for infection (i.e. what is the ‘host range’ of a given parasite?). In fact, even for known parasites, host range studies have been done almost entirely on European bumble bee species, which differ from those in North America.

Table 2. Crithidia bombi infected bumble bees collected during the summer of 2009. All collection sites were in Massachusetts, with the exception of the Pennsylvania and Maine CAP apiary site. 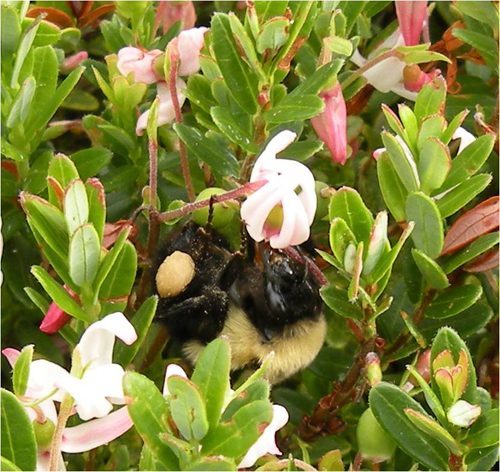 A pollen-loaded bumble bee foraging on cranberry flowers. Cranberry is more efficiently pollinated when the flowers are ‘buzz pollinated,’ and this is commonly done by bumble bees. They move their flight muscles rapidly and vibrate the flower, which releases pollen. (photo by A. Averill)

We have located a few isolated areas that harbor populations of the endangered B. affinis and B. terricola in our surveys of Northeast US. It has been a dreadful feeling to find these few rare bees as we sort collections. Thus, to carry out pathogen analysis for Bombus in these areas, we are looking at non-lethal sampling for PCR-based methods for the detection of gut-infecting parasites in the feces of bumble bees. Nosema bombi and Crithidia bombi cells are shed into the gut and can be detected in fecal samples using microscopy (Otterstatter and Thompson 2006). Deformed wing virus (DWV) and black queen cell virus (BQCV) are two gut-infecting honey bee viruses that have been shown to be reliably detectable in honey bee feces using reverse transcriptase PCR (Chen et al. 2006). We have been able to detect at least one DWV-like virus in samples of feces from commercial bumble bees. Provided that gut cells of the insect are also shed into the feces, this method will provide a means of collecting genetic information about the population of bees being studied including the possibility of accurately identifying the species of individual bees. 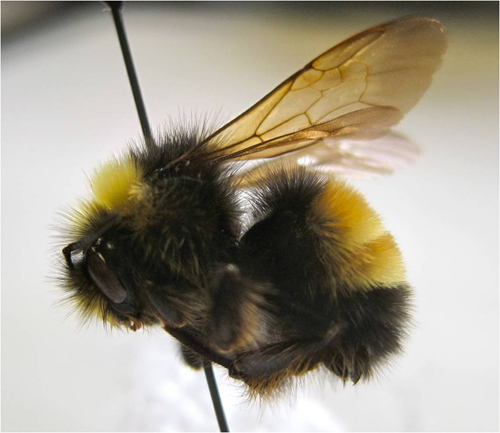 What do we know about Bombus pathogens in managed non-Apis?

We are planning to begin a survey of parasites in commercially-available Bombus. Several pathogens that can be found in wild Bombus can also be found in commercial colonies. In our preliminary studies of colonies from two commercial vendors, using PCR-based methods, we have been able to detect N. bombi, C. bombi, and L. buchneri. We have also found what appear to be the honey bee viruses DWV and BQCV. 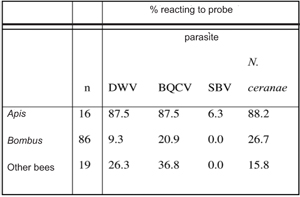 Table 3. Percent of bees reacting positively to parasite-specific probes for three viruses and Nosema ceranae, RNA and DNA were isolated from gut tissue of individual bees collected while foraging near the Maine CAP apiary in 2010.

No bumble bees or other bees reacted positively with sacbrood virus (SBV) probes. A single honey bee produced a SBV positive and this bee also tested positive for DWV and BQCV. Using these same probes for DWV, the 2009 bumble bee collection from the Minnesota CAP apiary did not test positive, but using a set of DWV probes that target a more highly conserved gene revealed that 17.6 % of bumble bees reacted positively. When analyzed further, it was determined that the RNA sequences of this gene were between a 96-98% match to a Pennsylvania CAP apiary DWV isolate.

It is possible that by using probes that target other regions in the genomes of these viruses, these results would be altered, especially in the case of DWV. However, without sequencing multiple regions in the genomes of these viruses, we cannot be certain that they are identical to those infecting honey bees and that they are indeed shared between diverse bee species. It is possible that the probes that are designed to detect honey bee pathogens are reacting positively with parasites that are only closely related to those found in A. mellifera. Similarly, other bees may react positively with N. ceranae probes if they are infected with a closely related microsporidian parasite.

While there are a number of reports of bumble bees infected with known honey bee pathogens, we will not know the impact of such infections on populations of native bees if we do not know the host range of these parasites and whether the parasites we are detecting are in fact the same. 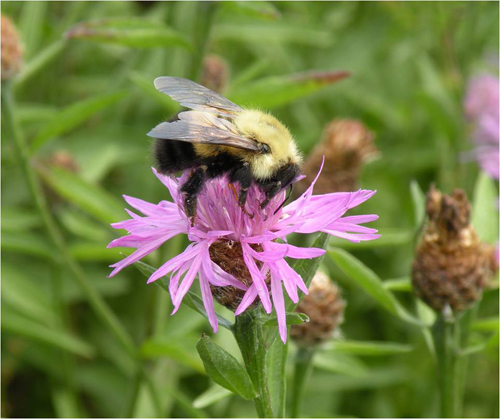 Bumble bee foraging in weed patch near cranberry bog in Sandwich, MA. (photo by A. Averill)

More information about the Managed Pollinator CAP can be found at their web-page at www.beeccdcap.uga.edu