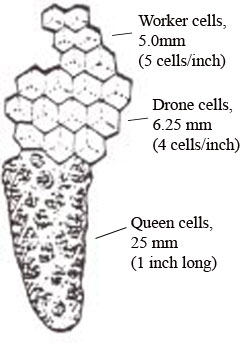 An important difference leading to worker-queen differentiation for the bees is the size and orientation of the cell of developing larva (see figure to left from Sammataro and Avitabile). Worker bees develop horizontally in hexagonal cells of approximately 0.2 inch (5 mm) diameter (5 cells/inch). The queen measures the cell opening with her front legs as she inspects each cell prior to laying her egg. Drones develop in slightly larger horizontal cells.

The female queen however develops in a vertically-oriented cell (appropriately called a queen cell). The existing queen herself lays fertilized eggs in special cup-like structures, called queen cups, oriented vertically on the face of the horizontal worker and drone comb or, more usually, at the bottom margin of the comb. Upon hatching, the queen larva is vertically positioned. Surface tension and a narrowing of the developing queen cell help it stay in place and keep it from falling out. The developing queen cell is enlarged vertically as the larva grows and it eventually becomes peanut-shaped as a capped cell with the pupa inside. As in worker and drone brood, the developing pupa does not eat although abundant food is left within the queen cell (it might assist in keeping the cell interior humid). The queen has to chew her way out of the capped cell (as do worker and drone adults) after the shortest pupal stage (seven days) of the three adult hive members.

Back to Basic Bee Biology for Beekeepers table of contents

Next: Sequence of Duties of Worker (Basic Bee Biology for Beekeepers) >>

Source:
The above text is taken from The Mid-Atlantic Apiculture Research & Extension Consortium, Basic Bee Biology for Beekeepers; Fact Sheet,MAAREC Publication 1.4 March 2004. You can download this factsheet and others at the MAAREC website