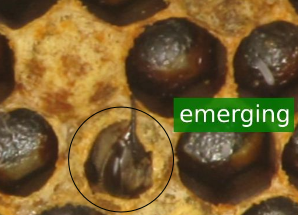 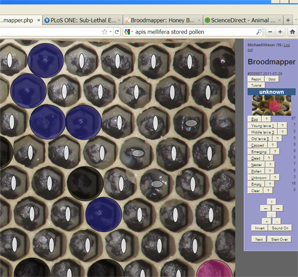 Figure 2: A screenshot from Broodmapper.com with scored cells.

Honey bees develop from eggs to adults in the cells of honey bee combs (Fig. 1). These combs also provide the structure for food storage; nectar and pollen. Beekeepers must learn how to identify the contents of comb cells to effectively manage colonies based on information such as; the health of colonies, if a queen is laying eggs, if the colony is growing or declining, if there are adequate stores, and other information necessary to make informed decisions.

Broodmapper.com (Fig. 2) is an interactive environment where you can learn to identify different stages of brood development and cell contents as you perform citizen science. Reed Johnson at The Ohio State University OARDC is investigating Miticide and Fungicide Interactions (Johnson 2011) and their effect on honey bee brood survival and development. As a part of that study, Broodmapper.com is used to determine the cell contents using photographs of combs from experimental colonies. Anyone can volunteer to help identify the cell contents in these photographs and hone their skills in inspecting colonies.

This page outlines the skills you will need to identify cell contents from images presented in the tutorial at broodmapper.com. Once you have reviewed this page, go to broodmapper.com, work through the tutorial and quizzes, then start helping to elucidate Miticide and Fungicide Interaction effects on honey bees today!

The first four stages of honey bee development identified in Broodmapper is shown in figure 3. The final two stages of development are capped pupae and emerging, adult bees (Fig. 1).The stages in figure 3 are generalized as; egg (0-3 days old), young larva (4 – 5 days old), middle larva (5 – 6 days old), and old larva (7 – 8 days old) (from Winston 1987). Being able to identify these stages have numerous benefits for beekeepers. When inspecting colonies, beekeepers can determine the age of worker brood found which informs when a queen must have last been present and laying. The young larva pictured in figure 3 (1), is the proper age for grafting, a method used to raise new queens (less than 24hrs past egg hatch).

Figure 4: Depending on lighting and glare when inspecting combs in the field, seeing eggs can be difficult (left) or more clear (right).

Combs with eggs are good places to find the queen, since she was obviously there recently. Depending on lighting and the condition of combs, identifying cells with eggs can be difficult or easy (Fig. 4). Honey bee eggs are deposited erect, standing on one end, which can also cause difficulty in identification when viewed directly down on the egg, in a foreshortened view.

Figure 5: A larva dead in its cell is circled. Dead larva can often bee discolored and misshapen.

Once an egg is laid, its successful development into an adult bee is not guaranteed. Interruptions in development can be measured in a number of ways, possibly informing us about negative effects from pesticides. To determine sub-lethal effects from pesticide residues in brood combs, Wu et al (2011) measured if eggs hatch, larval mortality, development time from egg to pupa, pupation, and adult emergence rate. Most of these measures require repeated inspections of the combs to check for changes in development. However, larval mortality can be evident during any hive inspection when dead brood is seen (Fig. 5).

Other than empty cells and cells with unknown contents, the remaining cell contents that you can identify in Broodmapper are nectar and pollen (Fig. 6). Pollen is deposited in cells as pellets from bee’s pollen baskets, or corbicula. Then, house bees pack and moisten the pollen with nectar and honey into layered masses stored in cells. Here the pollen undergoes chemical changes over time and is referred to as bee bread (Graham 1992). Nectar that has not yet been converted to honey is stored in uncapped cells, as seen glistening in figure 6. 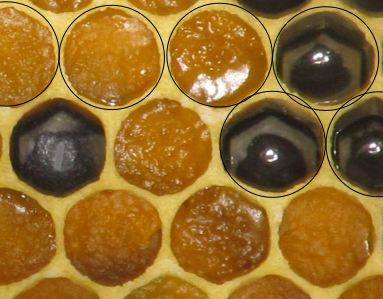 Figure 6: Cells with nectar and pollen, and a cell with an egg. Pollen and fresh nectar is often found in close proximity to developing brood.

Learn more by taking the tutorial at Broodmapper.com or reading more about this research project in the article, Miticide and Fungicide Interactions (Johnson 2011).

Images: Figures 1 – 6 are from Broodmapper.com