While the Managed Pollinator CAP team continues to unravel causes of bee mortality, we are also laying the groundwork for ways to keep bees healthy in the future. Goal 4 of our four-year project is to:

“Deliver research knowledge to client groups by developing a technology transfer program for queen breeders and literature on Best Management and Conservation Practices for managed pollinators as an eXtension Community of Practice.”

This article deals with one objective of this goal: to develop a technology transfer program for queen breeders. This is an objective near and dear to me, so I have chosen to lead the writing on this topic. 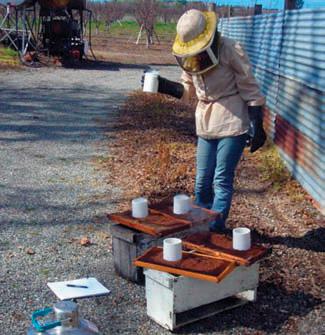 Figure 1. Testing colonies for hygienic behavior. 400 ml of liquid nitrogen from a Dewar tank is used to freeze-kill a round section of sealed brood, delineated by a 3” PVC pipe pushed into the comb.

I credit the idea for this objective to Dr. Medhat Nasr and the Ontario Beekeepers’ Association in Canada. In the early 1990’s, they established a Technology Transfer program with the mandate to “conduct research for Ontario’s beekeeping industry, facilitate a honey bee breeding program in Ontario and to transfer information, skills and methodologies to the beekeepers.” I picked the brains of Alison van Alten, the former Tech Transfer Team Leader, in 2008 when I invited her to northern California to help me explore whether a modified program could be established with bee breeders there. 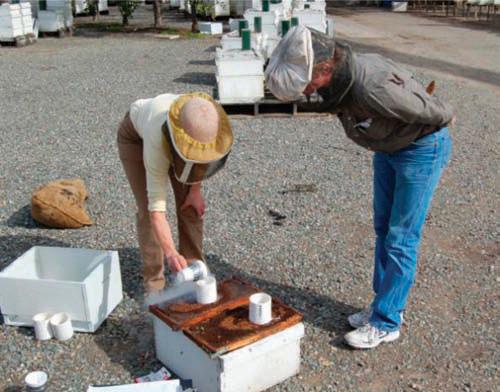 Bee breeders are a small but extremely important subset of beekeepers who provide the genetic material for beekeepers nationwide through the sale of queen bees. Given the serious and chronic health problems facing bees and the increasing demand for pollination services, it is critical to provide bee breeders assistance with the production of genetically diverse stocks of bees that can defend them¬selves against parasitic mites and diseases. 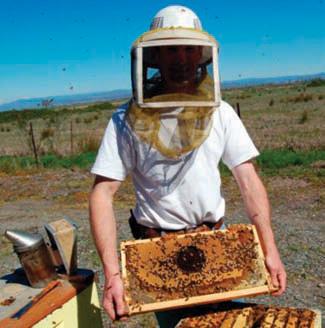 Figure 3. Buzz Landon shows results of a hygienic tests at Buzz’s Bees. This colony removed 100% of the freeze-killed brood within 24 hours and will be used as a breeder queen.

Since 2008, Gary Reuter, my graduate students and I have traveled to California to work one-on-one with 17 commercial queen producers located between Sacramento and Red-ding. Our original goal was to encourage these bee breeders to select for hygienic behavior, a trait that helps bees defend against Varroa mites, American foulbrood, and chalkbrood (Figures 1,2 3, & 4). During these visits, we also showed the bee breeders how to sample their colonies for Nosema disease by setting up microscopes in kitchens and outbuildings (Figure 5). In addition, Sue Cobey from UC-Davis accompanied us to some sites where she discussed the stock importation program (a UC Davis/WSU collaboration), to enhance the genetic diversity of bee stocks (Figure 6). In 2009, we facilitated cooperative research with Dr. David Tarpy from North Carolina State University to sample queens and drones produced by three of the bee breeders to determine the mating frequency of queens and the sperm viability of drones (Figure 7). We enlisted the fun help of Dr. Orley “Chip” Taylor from the University of Kansas to go “sky fishing” for drones from drone congregation areas (situated 20-30ft above ground where drones congregate to mate with queens) (Figure 8). 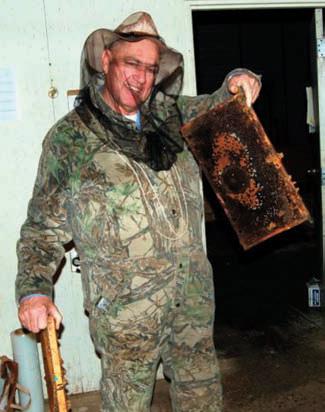 Figure 4. Steve Park shows off another hygienic colony at Steve E. Park Apiaries. Each queen breeding operation we visited had a number of good hygienic colonies. 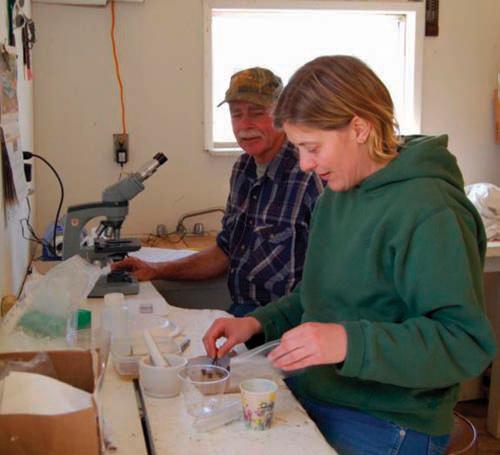 I’m proud to announce that after our years of exploration, funded by the University of Minnesota, the National Honey Board, the Almond Board of California, and the USDA-Managed Pollinator CAP, we now have a Bee Team up and running! We have one full-time person already in place, Katie Lee (Figure 9). Katie has been working on her own since December 2010, but she will be joined by Rob Snyder and Mike Andree by June this year. They will be working out of the University of California Cooperative Extension office in Oroville, close to the heart of the bee breeding operations in northern California. 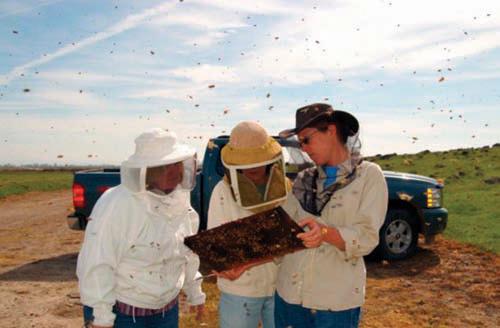 The Bee Team will provide the following services for queen breeders year round:
1.    Disease and pest diagnostics
2.    Assistance with stock selection and breeding for resistance traits
3.    Enhancement of genetic diversity in bee stocks
4.    Facilitate cooperative research on relevant topics

The Bee Team will test for hygienic behavior, Varroa mites, and Nosema in at least 50 colonies at each bee breeder’s operation three times each year. The data from the testing will be provided to each bee breeder in a timely manner to help them make informed decisions on choosing breeder queens and on appropriate treatments. The bee breeders have agreed to pay a fee for these services so that in the future, the Bee Team can be self-sustaining. If this model works well, we hope to find funding to establish similar teams to assist queen producers in the Southeast and other regions of the U.S. 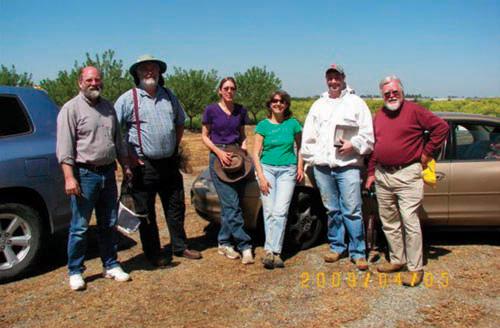 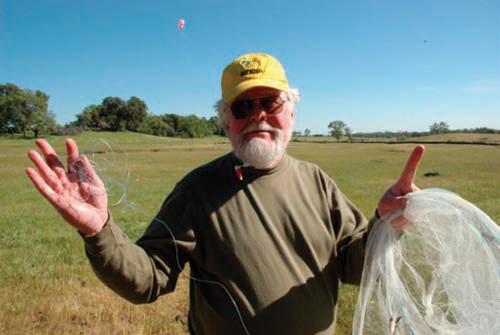 Figure 8. Dr. Chip Taylor demonstrating the drone trap he invented to collect drones out of congregation areas. The trap, containing lures scented with queen pheromone, is lifted to 20-30 ft by helium balloons or kites, and is controlled by a fishing rod and reel. 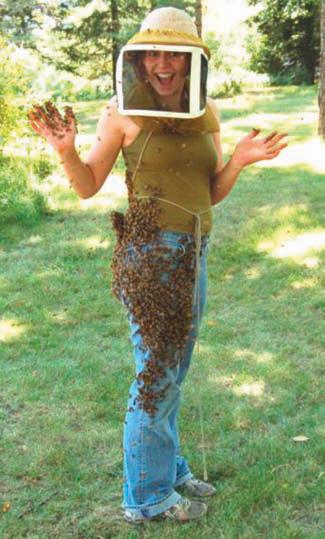